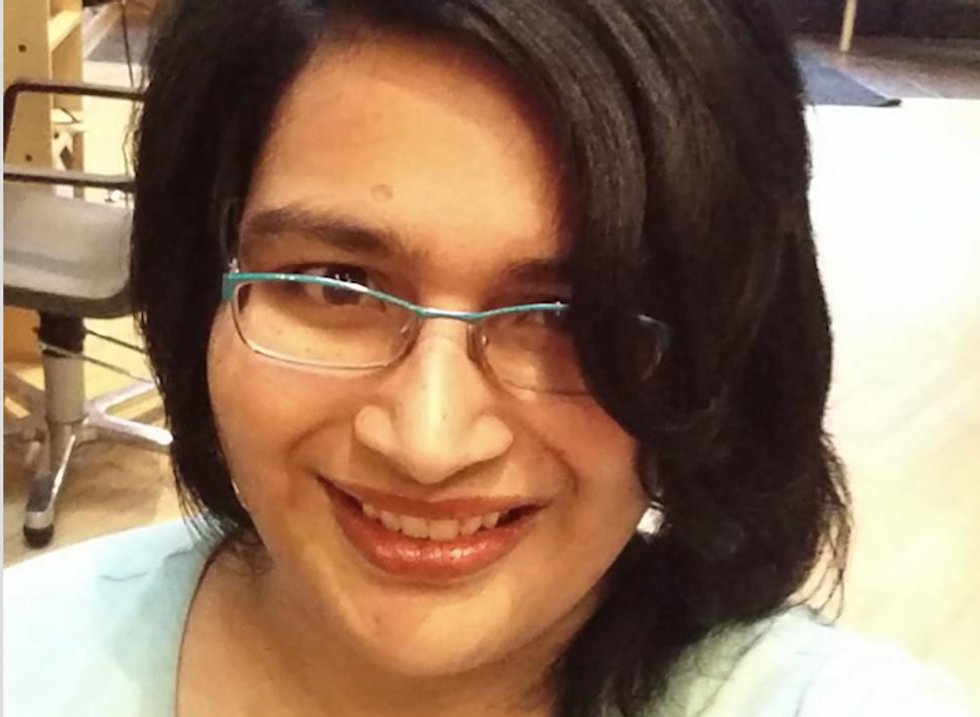 Indian-born transgender rights activist Nina Chaubal has been detained by immigration authorities and threatened with imminent deportation. She is currently being held in an Arizona Immigration and Customs Enforcement (ICE) facility notorious for its mistreatment of LGBT detainees.

Raw Story spoke to Greta Martela -- Chaubal's partner and co-founder of TransLifeline, an 800-number for trans people in crisis -- who explained that because of a bureaucratic muddle, Chaubal has been unable to complete the naturalization process. These types of catch-22 situations are all too common for transgender people as they attempt to negotiate the many layers of red tape involved in changing one's gender.

Martela and Chaubal are in the process of moving from Chicago to California. They were passing through Arizona on Wednesday, Dec. 28 on a return trip to Chicago when they encountered an immigration checkpoint. When asked if everyone in the car was a U.S. citizen, Martela told them that Chaubal is from India.

However, it was when Border Patrol officers saw Chaubal's passport -- upon which she is still identified as male -- that the situation became tense and uncomfortable.

"She hasn't had her gender changed on her Indian passport," said Martela by phone, sounding anxious and exhausted. "So they started low-key giving her shit about being trans, but eventually they said, 'We're going to take her to Wellton, Arizona' -- this was the Border Patrol -- 'and hand her over to ICE and then we're going to put her in front of a judge and try to deport her.'"

Chaubal is currently undocumented because her marriage to Martela has not been legally ratified. Martela needs to provide record of her divorce in 1990. However, the California records bureau that would ordinarily provide that verification lost years of documents in the transfer from paper to electronic records, Martela said.

"The woman I got divorced from is now deceased," she explained, leaving the pair in legal limbo until they can obtain documentation by some other means.

Chaubal came to the U.S. in 2009 as a student before going to work for Google. Now, the two have devoted themselves full-time to activism and providing direct aid to fellow members of the trans community.

Their life together is currently in jeopardy, however, as Chaubal could be deported at any time to a country she has not called home in seven years and where she faces prosecution under India's colonial-era anti-LGBT laws.

Over the last two days, Chaubal was transferred from a holding facility in Wellton to an ICE detention center in Eloy, AZ that is known for its abusive treatment of LGBT detainees.

Martela said she was able to get Chaubal her medications and a note with the number of a local immigration attorney before the transfer, but was not permitted to see or speak to her.

On Friday morning, two days after the arrest, the two were finally allowed to speak by phone for a tearful two minutes.

"She was crying, she was very upset," said Martela. "She's asking for asylum. It's actually illegal to be gay in India and gay marriages aren't recognized."

"So now we're trying to get her immediate release or to get her transferred to a facility in Santa Ana which is supposed to be better," Martela said.

It's frustrating, she said, because "there's very little information coming out of the system."

To track a detainee, you can only get information online and only then if you have access to that person's "A-number" or alien number.

Martela said she's waiting in Yuma for Chaubal's documents to arrive from Chicago via overnight mail. Once they arrive, she hopes to find Chaubal's A-number among them.

"Then we can go online and find out what's going on in Eloy," Martela said.

"We're going to make as much noise as we can," she said, heaving a shaky sigh. "We're getting help from the Transgender Law Center and lots of other kinds of activists are helping us but we need people to make enough noise that they either release or transfer her."

"If people make enough noise," she said, "it lets them know they can't f*ck with her. If they f*ck with her, they're risking their jobs, so we're trying to make some noise, trying to keep her safe until we can get her out."