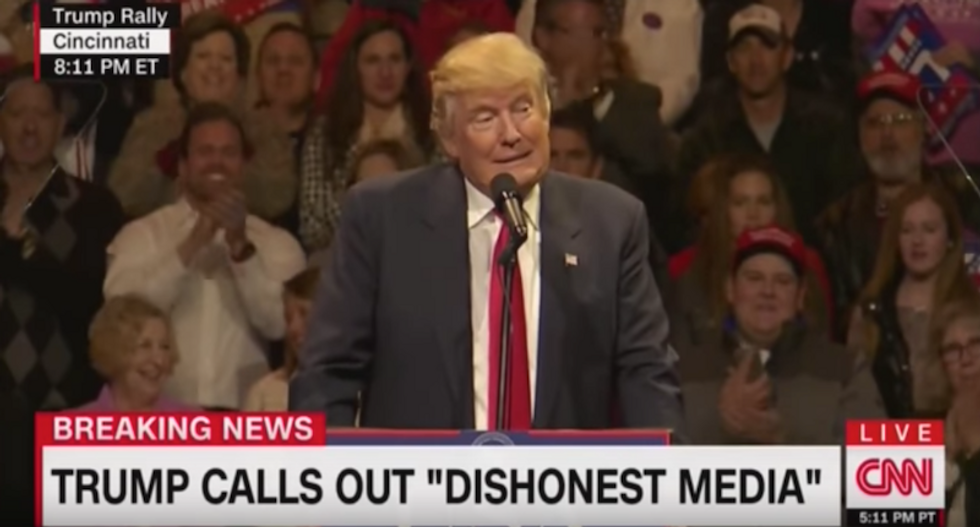 Donald Trump speaks at a Cincinnati rally about the "dishonest media" (CNN, YouTube)

During his campaign, President-elect Donald Trump waged a war on the media and journalists, bashing the press at rallies, claiming, "They will slander you, they will seek to destroy your career and your family."

Trump was at a separate event on Thursday night — the first stop of his "Thank you" tour. However, taking the stage in Cincinnati, he very much followed the same narrative, calling the press "extremely dishonest," and "brutal."

While Lewandowski has not yet been named as an adviser to the Trump campaign, he resigned from his post at CNN immediately following the election and was spotted at Trump Tower that same day.

His comments about Baquet were in reference to a September forum at Harvard University.

The New York Times editor joined a panel, including Intercept co-founder Laura Poitras and Washington Post associate editor Bob Woodward. Poitras asked if either outlet would publish Trump's tax returns — if they ever received them — even if it meant they'd face jail time. Both responded yes.

Speaking of this exchange at Thursday night's event Lewandowski said,  "We had one of the top people at the New York Times come to Harvard University and say, ‘I’m willing to go to jail to get a copy of Donald Trump’s taxes so I can publish them.’"

"Dean Baquet came here and offered to go to jail" he continued. "You’re telling me, he’s willing to commit a felony on a private citizen to post his taxes, and there isn’t enough scrutiny on the Trump campaign and his business dealings and his taxes? It’s egregious. He should be in jail."

During his campaign, Trump blacklisted a number of media outlets — including BuzzFeed, Politico, and the Huffington Post — who were barred from receiving press credentials to cover his rallies.

The Committee to Protect Journalists even released a statement earlier this year calling Trump a "threat to the rights of journalists and to CPJ’s ability to advocate for press freedom around the world."