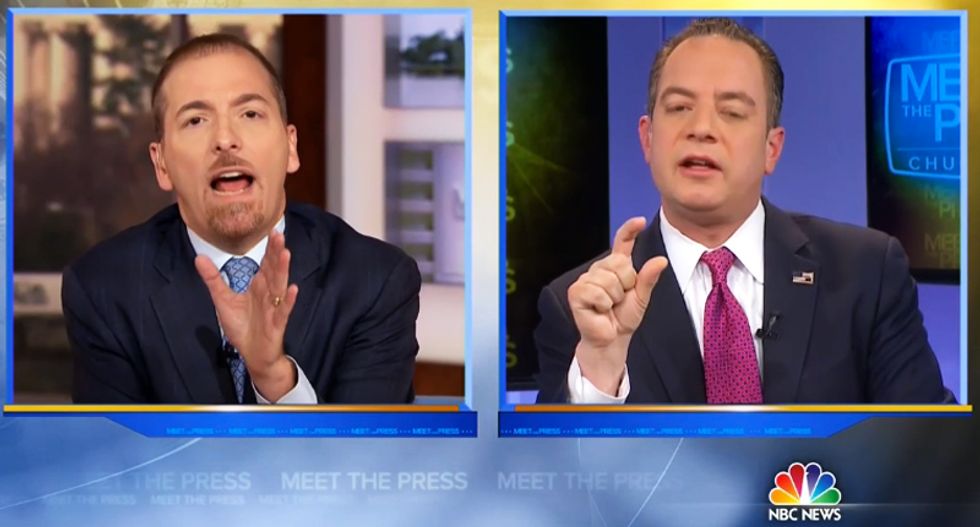 A surprisingly combative Chuck Todd hammered away at Reince Priebus Sunday morning, trying to get him to admit that the Russians may have tried to influence the recent presidential election, only to have the future Trump chief of staff continually duck the question.

In a heated interview on Meet the Press, RNC head Priebus refuted a story in the New York Times where CIA sources said Russian hackers accessed RNC computers but withheld the information in order to help Trump.

According to Priebus, the RNC invited the FBI to inspect their computers -- but he insisted the agency found no evidence of hacking.

Pressed by Todd over the possibility RNC staffers or people working with the RNC might have had their emails read, Priebus snapped back at the  host.

“I don’t know why you are so hot about this,” the Priebus exclaimed. “The fact of the matter is, the RNC was not hacked.”

Asked about a consensus of seventeen different intelligence agencies that showed Russian involvement, with host Todd asking, "You and Donald Trump don't believe that happened at all?" Priebus grew heated.

"Wait a second, now you're being so circuitous, Chuck," Priebus accused.

Noting that he is not yet a part of the briefings, Priebus once again attacked the New York Times article only to have Todd cut him short.

"You keep talking about the New York Times," Todd shot back, before asking Priebus once again, "Do you believe that Russia was trying to muddy up and get involved in the election in 2106?"

"Number one, you don't know it and I don't know it," Priebus said. "And there has been no specific or conclusive report to say otherwise."