Ex-CIA officer questions Trump's patriotism: He only 'consistently defends Putin and the Russians' 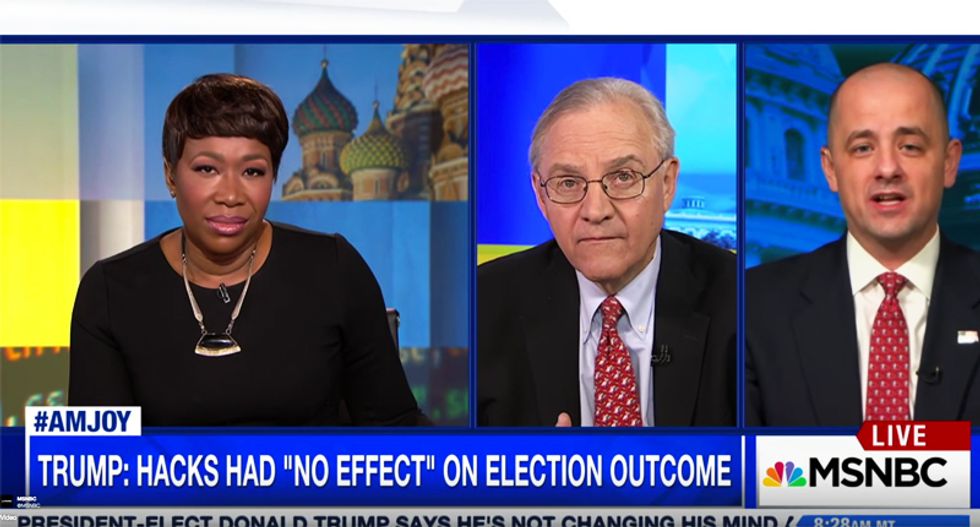 Former CIA officer and presidential candidate Evan McMullin questioned  President-elect Donald Trump's priorities -- or possibly his his patriotism -- on Sunday morning by saying he only sticks up for Vladimir Putin and Russia.

Appearing on MSNBC's AM Joy in the Morning, McMullin was unsparing in saying there are many questions where Trump's loyalties lie.

"There are two tests, the first test is this question: Does Donald Trump act on behalf of a foreign power, or does he act in the interests of a foreign power especially over our own interests," McMullin remarked. "The clear answer to that is, yes, and that is very alarming."

"The second question is: Does Donald Trump act under the control of a foreign power?" McMullin continued. "That's very hard to determine. I think we would know more if we had his tax returns. But it very disturbing and peculiar, to say the least, that Donald Trump, that there is one thing he's consistent on, it's his defense of Vladimir Putin and the Russians. He will change his views on a range of things, but not on that, over the past year he has remained absolutely consistent on that."

"That is something we need to know more about, but it is truly alarming," he concluded.

.@EVAN_MCMULLIN: Does #DonaldTrump act in the interest of a foreign power over U.S.? The clear answer is yes #AMJoy https://t.co/eQD3uU8v7H