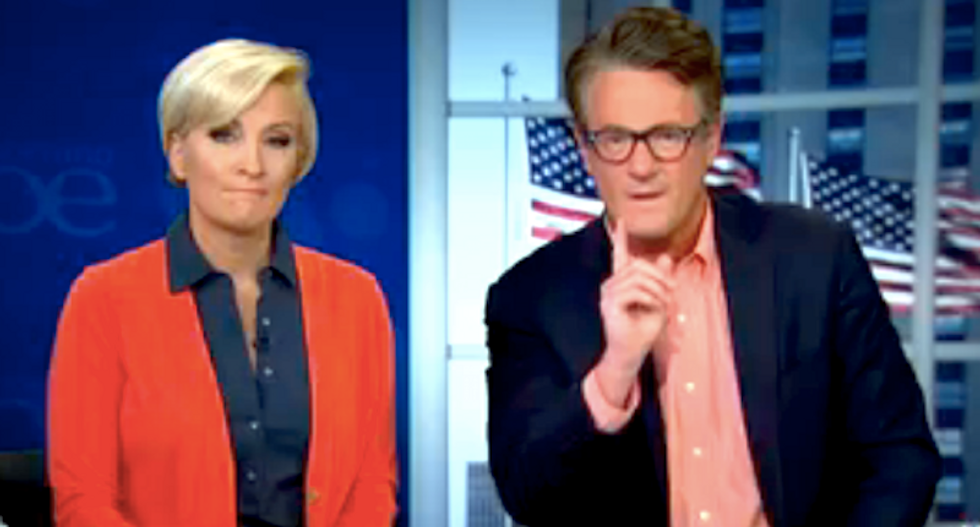 The New York Times reported Sunday that the pair had been "among the revelers" at Trump's New Year celebration at Mar-A-Lago in West Palm Beach, Florida, and reporter Sopan Deb, who covered Trump's campaign for CBS News, tweeted about their presence at the party.

Deb, who will soon join the Times as a culture reporter, pointed out on Twitter that then-candidate Trump had publicly thanked Scarborough and Brzezinki as "supporters" during a phone interview in February.

Scarborough strongly objected to Deb's use of party as a verb, and claimed in a series of tweets that he and his co-host were at Trump's New Year's Eve bash for business -- not pleasure.

The TV host claimed he and Brzezinski had a 7 p.m. appointment with Trump to set up an interview, which he said was no different than what reporters do at CBS News or the Times.

"The event was black tie. Both Mika and I were in casual clothes, did not attend the party, and left before any 'partying' began," Scarborough tweeted. "Nothing that Mika and I did in setting up this meeting was any different than what all good reporters and news hosts try to do daily."

"Anyone suggesting otherwise is a hypocrite who ignores what great journalists from Ben Bradlee to Tom Brokaw have done for years," he added. "I hope we get the interview. Stop lying about us."

He insisted that he and Brzezinski went through security and around the guest area, where they were briefly stopped by some of their show's viewers, before walking to their meeting with Trump.

"That is not, by any reasonable definition, 'attending' the party," he tweeted.

Maggie Haberman, who wrote the Times report, stood by her work.

"They literally were among the revelers," Haberman tweeted. "As in, in the crowd. Doesn't mean they stayed all night etc."

Scarborough has drawn criticism for his relationship with Trump in the past.

Both he and Brzezinski are close friends with the president-elect, who was a reality TV star for NBC on "The Apprentice," and the former Republican congressman has often stayed at Mar-A-Lago with his family.

Scarborough said Sunday evening that he didn't stay at the Trump party but instead watched "Groundhog Day" and "Ghostbusters" with his children after his scheduled meeting the president-elect, and then watched "the Mariah Carey dumpster fire" on TV.