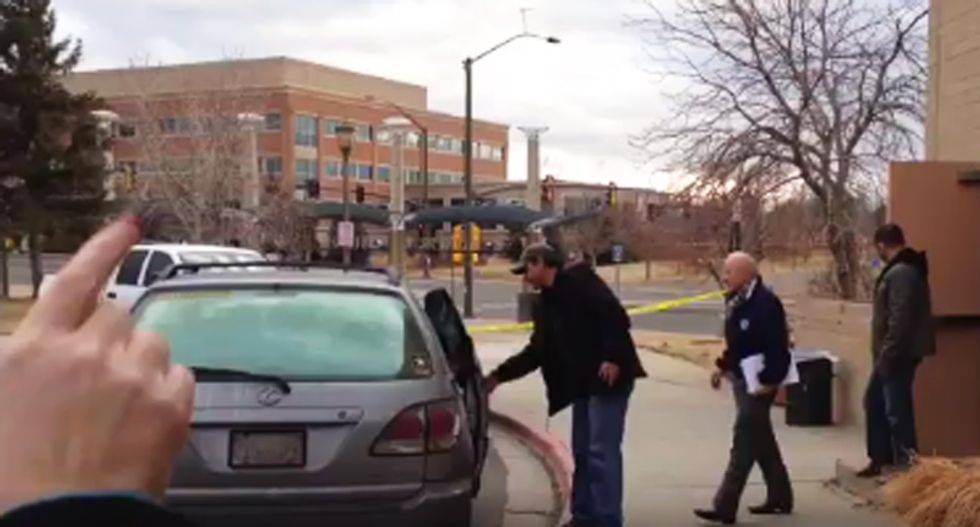 A Colorado Republican is under fire after holding what was supposed to be a town hall, only to allow four attendees at a time to see him before sneaking out a back door.

According to KUSA, hundred of constituents showed up to meet with Rep. Mike Coffman (R-CO) at a local community center in Aurora, many of them wanting to talk to the representative about his plan to vote to dismantle the Affordable Care Act.  But instead of being ushered into the main hall as a group to speak with the lawmaker, they were told the congressman was only doing on-on-ones and they would have to wait their turn.

"The Representative didn't have a plan. They expected just a small handful of people to show up," Kronda Seibert said. "We were under the understanding it was a town hall meeting and they were only allowing four people in at a time."

So many people showed up that local police were called in to use crime scene tape to create a perimeter to hold people back that allowed Coffman to sneak out early unbeknownst to those still waiting to see him.

According to Berthie Ruoff, she was also surprised to see so many people show up, but stuck around to talk to Coffman about the challenges she faces if the Republicans gut Obamacare.

"My husband passed away and the only way I was able to get insurance was through the Affordable Care Act, Obamacare," she explained. "I am potentially going to lose my health insurance. I've had a preexisting condition. I've had breast cancer. What's going to happen to me? My spouse who had health insurance passed away. What do I do? You know, what am I supposed to do?"

Unfortunately for her, like many who showed up to confront Coffman, she never got a chance to see him before he slipped out.

"I am trying to get an answer and I can't even get in," Ruoff said.

Watch video of Coffman's constituents singing while waiting to see him below as well as video of him sneaking out via KUSA:

While more than 100 people were waiting to meet with him, Mike Coffman sneaks out early from his own community even… https://t.co/FVfjULrXpR
— Nelson Garcia (@Nelson Garcia) 1484434733.0