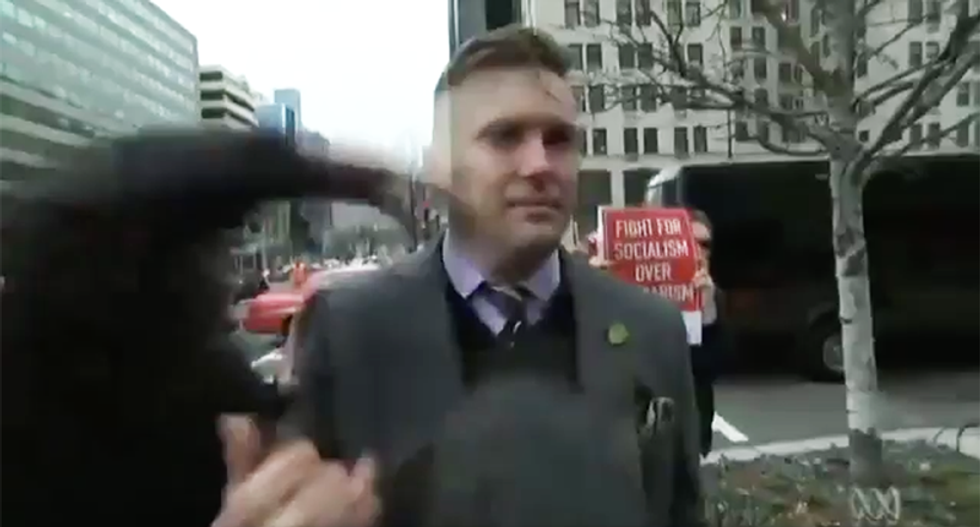 Richard Spencer, seconds before being punched in the face. (Photo: Screen capture)

White nationalist Richard Spencer was reportedly sucker-punched in his face during the inaugural festivities for President Donald Trump today.

A video shared on Twitter shows Spencer discussing the "White lives matter" movement while he's being harassed and heckled by onlookers. One person called Spencer a Nazi and Spencer corrected the person, claiming that Nazis actually hate him.

While Spencer was talking about the impact Pepe the Frog had during the election, an unidentified white man dressed in a black hoodie with a black cloth over his face approached Spencer and punched him in the face. Spencer collapsed to the side and quickly ran away while fixing his hair. Claims that this occurred during the inaugural festivities are unverified, however.

The attacker fled the scene in the opposite direction.

Spencer, a leader of the so-called "alt-right" movement, has come under political attack for his white nationalism and his targeting of professors. He notoriously held a gathering of neo-Nazis and white nationalists shortly after the election not far from the White House. Spencer's final remarks led the crowd in a chant of "Hail Trump!" in which audience members raised their hands in a Nazi salute. Spencer's mother has also come under fire in her Montana town and white nationalists have tried to organize a rally in support.

Some online have turned the video into a way to mock Spencer.

I made an animated gif out of the shitlord neo-nazi Richard Spencer getting clocked in the face at the… https://t.co/UMxIN9skUX
— Analyzed Threat (@Analyzed Threat)1484955026.0

You can watch the attack below: