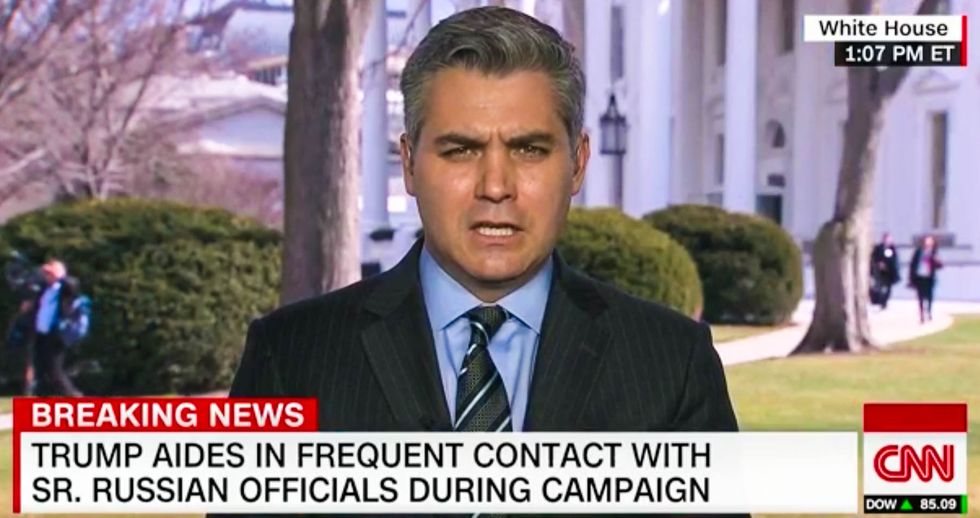 CNN's Jim Acosta calls out the White House for ducking questions about its ties with Russia (Screen cap).

President Donald Trump held a joint press conference with Israeli Prime Minister Benjamin Netanyahu on Wednesday, but he got through it without answering any questions about his campaign's reported contacts with Russian intelligence agencies.

The reason for this was simple: Trump only called on sympathetic conservative news outlets including Townhall and the Christian Broadcasting Network over more traditional media outlets.

CNN reporter Jim Acosta, who drew the ire of the White House earlier this year when he tried to ask the president a question during a press conference, tried to get a question in about Trump's Russia ties, but was promptly ignore as the president walked away at the end of the conference.

Appearing on CNN afterward, Acosta said that Trump's decision to only call on sympathetic outlets was part of a broader strategy to avoid facing any tough questions about his administration.

"He got no questions at this news conference about this major news that we've seen breaking in the last 24 hours... that associates of the president, aides of the president during the course of the 2016 presidential campaign with Russians... who are known to the U.S. intelligence community," he said. "This president, this White House, has come up with their own solution for, basically, questions that they don't want to answer at this point."

Acosta said that despite the Trump administration's evasions, however, that these kinds of tactics "don't work" in the long run.