'Do all orange people know each other?': Seth Meyers slams Trump for racist question to black journalist 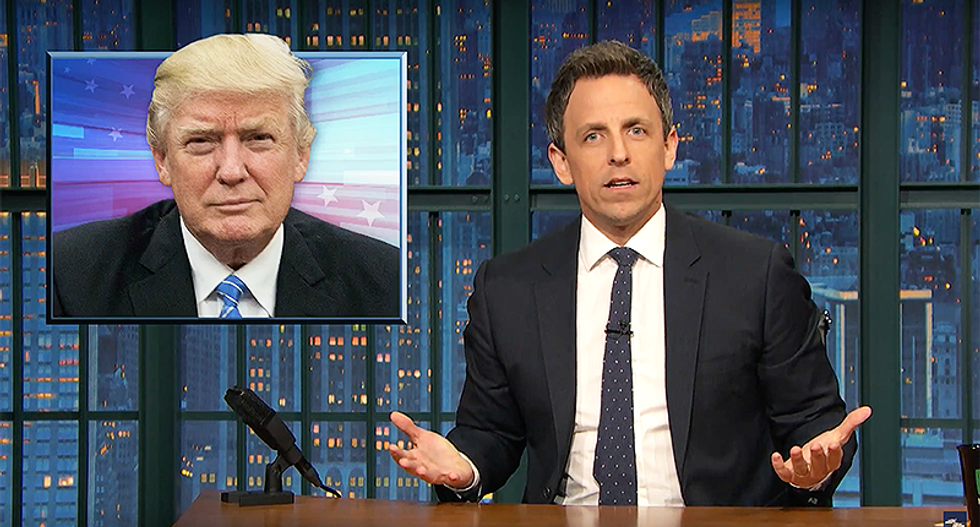 Today, President Donald Trump doubled down on the chaos in his administration, according to "Late Night" host Seth Meyers.

In his Thursday night "Closer Look" segment, Meyers explained that his team of writers put together a great segment well ahead of the show, but when Trump's press conference began, they scrapped the whole bit and started over.

It "can only be described as a bats*hit-crazy press conference," Meyers said. The fascinating thing for Meyers to watch has been the unique ways Trump has found to avoid questions about Russia.

One move, Meyers described, as "The Driftaway," in which Trump managed to mosey away while CNN's Jim Acosta was shouting out a question at him about Russia. Another is the "Pretend I Don't Hear You." That move was on full display when CNN reporter Sara Murray shouted out a question while in the oval office when Benjamin Netanyahu was visiting.

"Being a world leader sitting with Trump right now is like being a woman on a date with a guy and then his wife shows up screaming, 'Your kids want to know where you are!'" Meyers exclaimed.

Governing is actually harder than Trump may have thought, according to Meyers. He concluded it might be why Trump keeps reliving the glory days of the campaign every time he speaks.

"He's responding to all of the chaos of his government by heading back out to the campaign trail less than four weeks into his presidency," Meyers said. "You're like somebody that wants a birthday month. Your birthday is over! Get to work!"

Meyers argued that if Trump starts talking about it then it's only a matter of time before CNN has a countdown clock for 1,354 days before the next election.

When it came to Trump's question to African-American journalist April Ryan about the Congressional Black Caucus, "are they friends of yours," Meyers flatly called it racist. "You don't know all orange people. Hey, Donald! Can you set up a meeting with Snooki and the Lorax?"

Ryan wasn't the only person insulted, Trump also went after a Jewish journalist asking questions about anti-Semitism, saying that he lied and told him "quiet, quiet, quiet."

Meyers also included a hilarious supercut of all of Trump's attacks on the media from the 77-minute press conference.

Watch it all below: