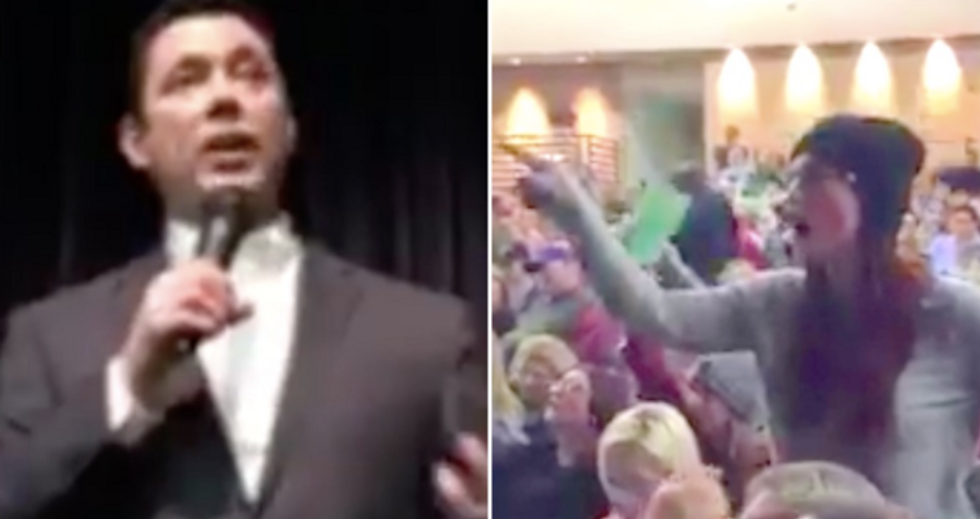 Hundreds of angry Utah residents packed a town hall hosted by Rep. Jason Chaffetz (R-UT) -- who hasn't shown much enthusiasm for performing his oversight duties over the White House -- and chanted "do your job."

About 1,500 more people waited outside Brighton High School, holding signs that echoed the chants inside, along with others that read, "America is better than this," reported The Salt Lake Tribune.

The hostile crowd of about 1,000 people, which the newspaper described as mostly political opponents of the Republican lawmaker, roared "explain yourself" at Chaffetz -- and frequently interrupted to express their disapproval at his answers.

"If you want me to answer the question, give me more than five seconds to do it," Chaffetz said at one point.

Attendees arrived early to get into the event, which they complained the GOP lawmaker had deliberately scheduled at a small venue to limit the pushback he expected to face.

Three of those focused on public lands and four on investigating President Donald Trump in the lawmaker's role as chairman of the House Oversight Committee.

According to news reports, Chaffetz met Tuesday with Trump and Reince Priebus, his White House chief of staff, and the president strongly cautioned the lawmaker against probing his actions as chief executive.

"Before my bum even hit the chair," the president said no oversight; you can't talk about anything that has to do with oversight and I said, 'fair enough," Chaffetz said, according to the Washington Examiner.

Chaffetz claimed the president encouraged him to investigate anything he wanted when they met a month earlier at the annual Republican retreat in Philadelphia.

The lawmaker said he was looking into comments made by Kellyanne Conway, the president's senior advisor, who promoted clothing sold by Ivanka Trump during a Fox News interview.

"There's no case to be made that we went soft on the White House," Chaffetz told his constituents. "In terms of doing my job, that's what I'm supposed to be doing."

One constituent, a woman from Salt Lake City, read Chaffetz's own words back at him, when he called on all the presidential candidates to release their tax returns -- which Trump still refuses to do.

"I'm asking you to explain what your timeline is to uphold your word or why there is a reluctance to do so," said the woman, Melissa Batka Thomas.

Chaffetz told the woman the president was "exempt" from conflict of interest laws, which he has said before.

"Until there is evidence that he has somehow overused that to ingratiate his family …" Chaffetz said, but he was drowned out in a shower of boos.