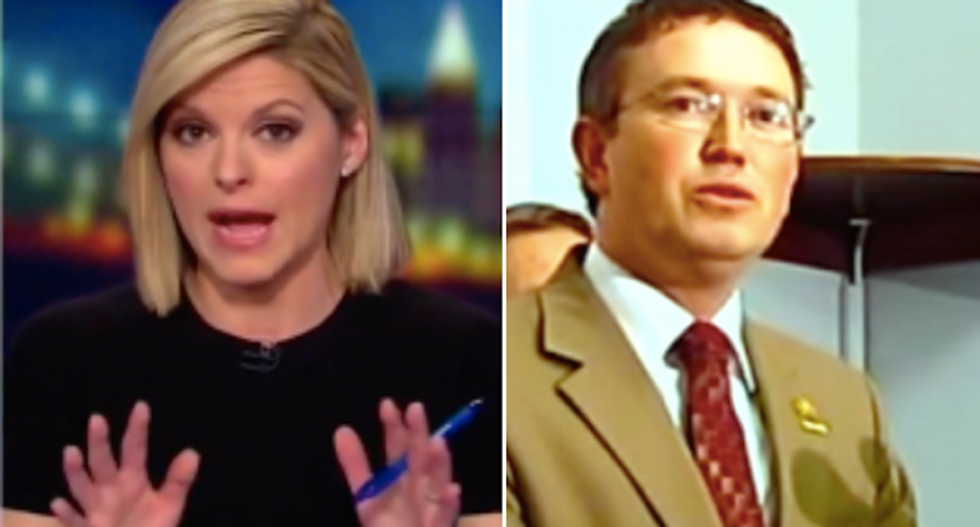 A Kentucky Republican knocked CNN's normally unflappable Kate Bolduan sideways by suggesting President Donald Trump was being played for a pawn by "Deep State" forces eager for conflict with Russia.

Rep. Thomas Massie (R-KY) appeared Friday morning on CNN's "At This Hour," where he defended the president after reports showed Michael Flynn misled FBI investigators and the vice president about his calls to the Russian ambassador.

Bolduan reminded Massie that lying to the FBI is a felony, although federal officials said the ousted national security adviser was unlikely to face prosecution.

"What we do know is that it was illegal for them -- somebody at the FBI or the NSA to leak this information, (and) there should be an investigation there," Massie said. "By the way, the NSA is a branch of the military, and what separates the United States from a banana republic is the fact that our president is above the military. If you've got the military, i.e., the NSA, undermining a presidency, that's very troubling. That's starting to look like a third-world country there."

Bolduan pointed to Trump's attention-grabbing news conference Thursday, when he claimed the leaks were real but the news about them was fake, and she asked the lawmaker whether those claims contradicted one another.

"They could absolutely be true," Massie said. "There could be a leak of a transcript that's correct, and then they didn't report the transcript directly."

That's when he uncorked a conspiracy theory about anti-Trump forces within the federal government.

"I do disagree with a lot of people here in Washington and maybe some supporters of Trump who say that this is an effort by the Obama administration to undermine the Trump administration -- the carry-overs," Massie said. "I"m worried it's something deeper than that. I'm concerned that it's an effort on those who want a provocation with Russia or other countries to sort of push the president in the direction. So I don't think it's Trump vs. Obama -- I think it's really the Deep State vs. the president, the duly elected president."

Bolduan pressed the congressman on his claims, and he claimed those same government forces had also pushed Obama into military actions in other nations.

"I think he got pulled by the military-industrial complex and the intelligence community into these positions," Massie said. "He even helped cover up Saudi Arabia's involvement in 9/11."

"That's an important point that we'll definitely want to discuss more if you have evidence that this is a concerted effort to draw the president into a conflict with Russia," Bolduan said. "I do want to have you back on, congressman, but we're out of time now."