House Republicans ‘not flinching’ on Trump-Russia investigation: ‘It's not a story playing back home’ 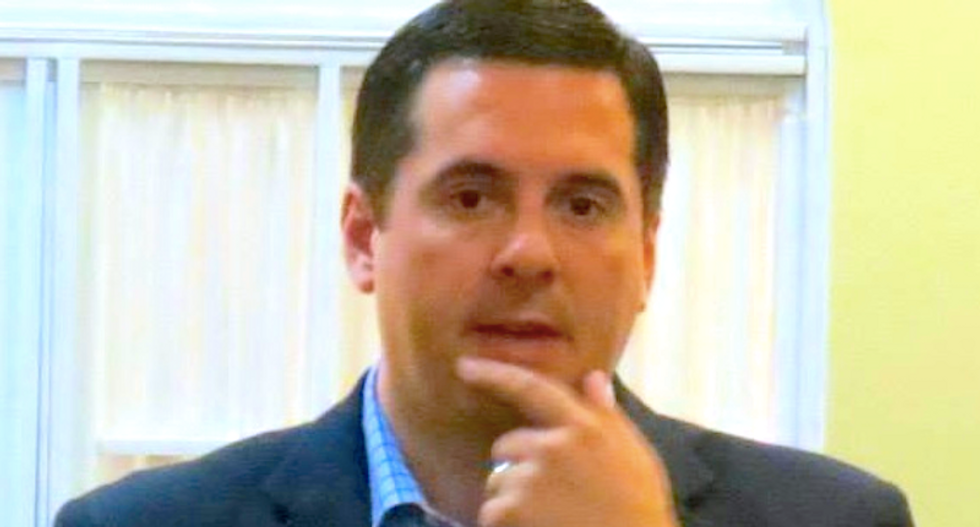 House Republicans accused the Democrats of playing politics by demanding a full probe of reported communications between the Trump campaign and Russian intelligence.

Rep. Devin Nunes, chairman of the House intelligence committee, reacted angrily Wednesday to calls for an expanded probe after the New York Times and CNN reported on extensive and unexplained contacts between the Trump campaign and Russia, reported Politico.

“The Democrats can play their politics all they want; they’re welcome to do that, this is Washington,” Nunes said. “But as far as I’m concerned, we will continue to investigate the Russian activity like we’ve done for many years.”

The House panel has been investigating the alleged ties, but Nunes refused to consider a select committee -- as called for by Sen. Lindsey Graham (R-SC).

One senior House Republican admitted “there is great angst and concern about this amongst members,” the website reported, but GOP lawmakers have so far argued the House intelligence probe was sufficient.

“We support the president and we’re not flinching on this one,” another House Republican told Politico. “It's not a story playing back home. Our focus is on other issues -- we have big agenda items we want to accomplish.”

Sen. Rand Paul (R-KY) said Tuesday that Republicans should remain focused on rolling back health care reform instead of investigating why Michael Flynn stepped down as national security advisor over his communications with Russia.

“I just don’t think it’s useful to be doing investigation after investigation, particularly of your own party,” Paul told Fox News. “We’ll never even get started with doing the things we need to do like repealing Obamacare if we’re spending our whole time having Republicans investigate Republicans. I think it makes no sense."

Nunes continues to blame any election interference on Obama, who he argues did not do enough to act on intelligence reports -- but the GOP congressman sounds like the Senate majority leader, who resisted attempts to probe Russian hacks as political witch hunts.

Senate Majority Mitch McConnell (R-KY) was briefed, along with other lawmakers from both parties and President Barack Obama in September on the alleged hacks.

According to the Washington Post, McConnell "raised doubts about the underlying intelligence and made clear to the administration that he would consider any effort by the White House to challenge the Russians publicly an act of partisan politics."

Obama ultimately decided not to act before the election without bipartisan support to avoid the appearance of helping Hillary Clinton, his former rival and secretary of state.

Nunes, who doubted the evidence of Russian interference in that Dec. 9 Post report, praised the FBI director's decision to reveal a new probe of Clinton's emails just days ahead of the election.

“FBI Director James Comey is right to reopen the investigation and pursue all leads until we know the full extent of Clinton’s misconduct and the full extent of the harm she did to our national security," Nunes said Oct. 28. "In light of these circumstances, it’s impossible to see how Director of National Intelligence James Clapper can believe Clinton or any of her implicated staffers should ever again be provided access to classified information.”