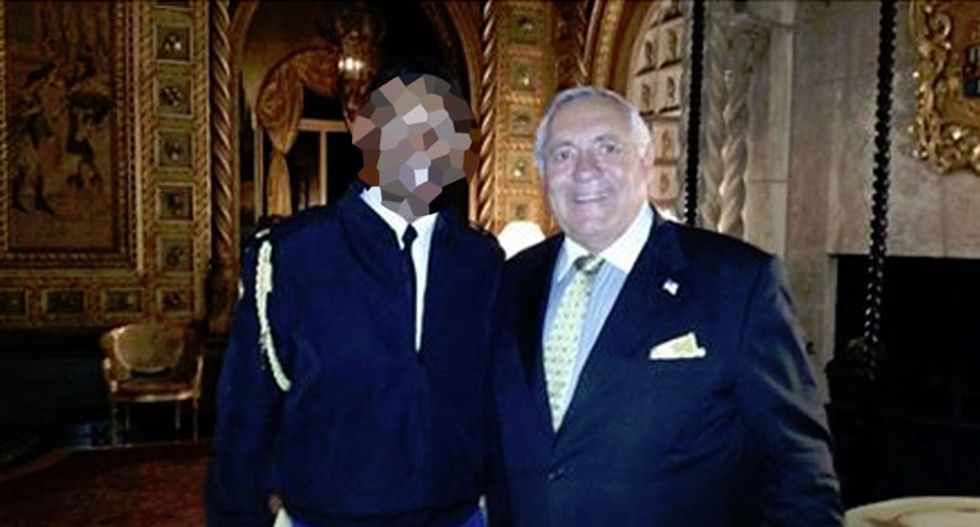 A member of the private club owned by President Donald Trump apparently posed for a photo during a party with a military aide who carries the so-called "nuclear football."

Trump hosted a party for Japanese Prime Minister Shinzo Abe on Saturday night at his Mar-A-Lago resort in Palm Beach, Florida, where the president took a national security phone call over dinner -- and within earshot of his guests -- on North Korea's ballistic missile test.

A private club member, Richard DeAgazio, posted a photo of himself on Facebook taken at the event with a man he identified as Rick, who carries "the nuclear football."

"The nuclear football (also known as the atomic football, the President's emergency satchel, the Presidential Emergency Satchel, the button, the black box, or just the football) is a briefcase, the contents of which are to be used by the President of the United States to authorize a nuclear attack while away from fixed command centers, such as the White House Situation Room,” deAgazio said in the caption.

Another photo showed the same uniformed man carrying a briefcase.

“It functions as a mobile hub in the strategic defense system of the United States. It is held by an aide-de-camp. and Rick is the Man,” deAgazio said.

DeAgazio, who joined the club three months ago, told the Washington Post that "Rick" had not disclosed that information, which he looked up later on Wikipedia.

He also posted several photos of Trump speaking to Abe about the North Korean missile launch, along with photos of First Lady Melania Trump at the party.

Annual fees for Mar-A-Lago members have doubled to $200,000 since Trump won the election, and some have wondered whether the club could pose a national security threat.

How many of Mar-a-Lago's new members will be (already are?) members of foreign intelligence agencies & media organi… https://t.co/ACMpphDJyh
— Chelsea Clinton (@Chelsea Clinton) 1486956874.0

Trump was a frequent critic of his Democratic rival, Hillary Clinton, for what he deemed to be lax security of her own private communications.