Maxine Waters: US policies on Russia are being dictated by a 'Kremlin clan' inside the White House 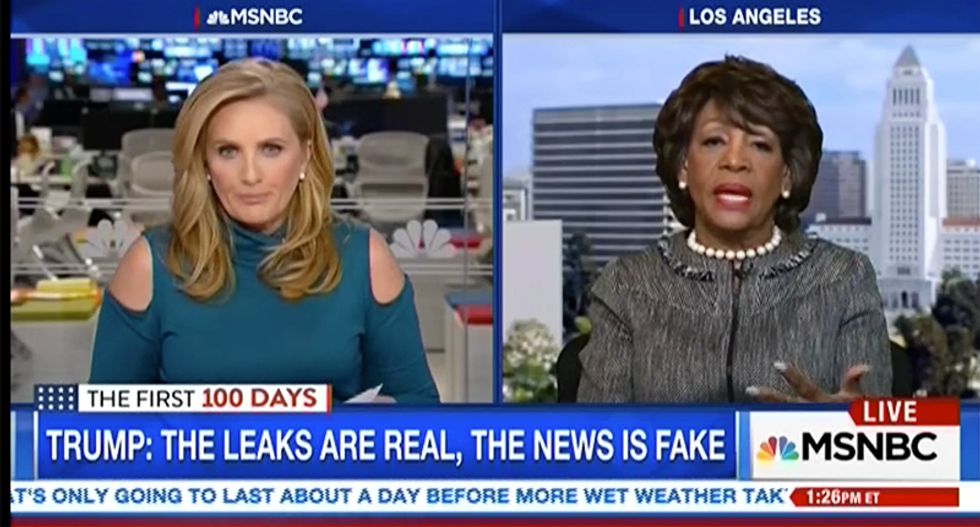 Rep. Maxine Waters (D-CA) leveled serious charges against the Trump White House on Sunday, saying U.S. policies toward Russia are being driven by what she called the "Kremlin clan" more interested in oil and personal business than U.S. needs.

Appearing on MSNBC with host Alex Witt, the California congresswoman said Trump's recent attacks on the media are a way to delegitimize their reporting on his Russian connections.

Waters' claims came just before the New York Times released a bombshell report stating that Trump insiders and associates were working on a plan to blackmail Ukraine President Petro O. Poroshenko in an effort to make the Obama-era sanctions disappear.

According to Waters, Trump is worried his supporters will start to put two and two together as more Russia revelations come out, including those involving the people he has surrounded himself with.

"They see that Flynn, who he had to fire, was talking with Russia about sanctions with the Russian ambassador," she explained. "I believe that [Secretary of State] Tillerson, who was the CEO of Exxon, has as his highest priority getting rid of the sanctions. Don't forget, he is the one who negotiated the deal with Russia to drill in the Arctic and that was stopped because Obama placed sanctions on them and they couldn't proceed with that. And so Tillerson, who has this great relationship with Putin, is going to do everything that he can to lift those sanctions and that's going to be their Achilles heel."

Waters then said that Tillerson is just one part of what she calls the "Kremlin clan," and that it begins at the top with Trump.

"Why does he like Putin so much?" Waters asked. "Why does he defend them? And I think it's all connected to what I call the Kremlin Klan. All of these people around him that are connected to oil and gas in the Kremlin and Ukraine. It's all about them. Just think about it. Manafort, his campaign manager, and who had to leave because it was determined that he had connections to the Kremlin and to the Ukraine and whether you're talking about him or Roger Stone or some of the others, they are all about oil and gas and they thought that if they elected Trump, that somehow they were going to have someone friendly to them that would help lift these sanctions and this Kremlin clan are all going to benefit from it."

According to the congresswoman, lawmakers need to begin serious investigations into Russia's deep connections within the Trump White House.