Media critic: Press needs to stop acting like Trump's 'botoxed Riefenstahls' and realize he's at war with them 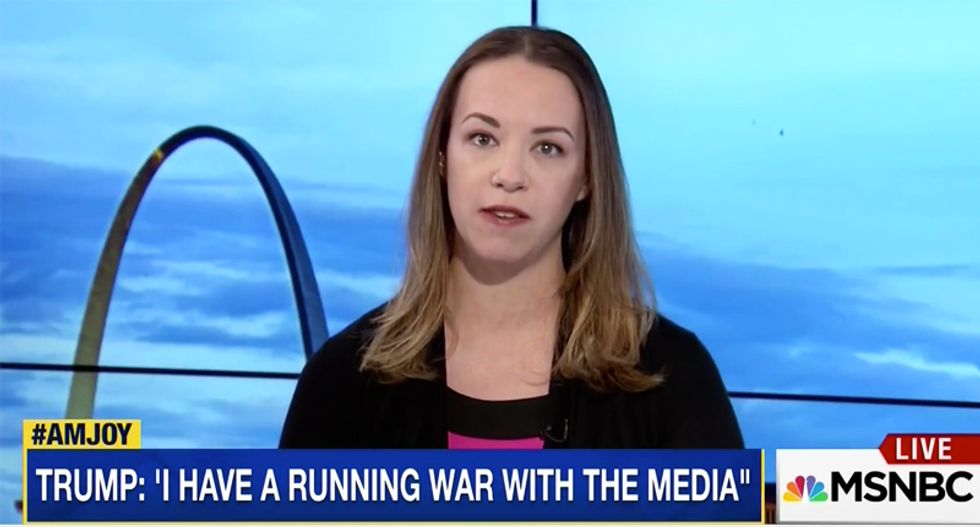 A media critic took the press to task Sunday morning on MSNBC, pointing out that President Trump has all but declared war on them and that they need to start doing their jobs.

During a discussion over who will boycott the the White House Correspondents Dinner first -- Trump or the media -- writer and media critic Sarah Kendzior said the campaign is over and the press needs to stop propping up Trump like "a bunch of botoxed Riefenstahls" -- a reference to master Nazi propagandist Leni Riefenstahl.

"This is an administration that is mimicking some of the sort of worst traits of sort of autocracies,"  host Joy Reid asked Kendzior. "Is there a special peril in this ongoing war as Donald Trump sees it?"

"Yeah, I  mean, the media should see this as a war when the president declares you their enemy, declares you the opposition party and when they have that executive power and are issuing a bunch of unconstitutional executive orders," Kendzior replied. "You should take that very seriously and not necessarily take your First Amendment rights for granted. That said, I think that press should continue doing their job regardless of what kind of fear this administration thinks it's going to instill."

"I think the obligation of the press is to serve the public and they should put that first," she continued. "I think they should have been putting that first all along instead of playing a part and propping up this dictator that we've got going on. You know,  I'm glad to see the press taking a more aggressive stance, doing more investigative pieces, acting less like a bunch of botoxed Riefenstahls propping up this guy."

"That's the way we need to keep going and we need to accept things have definitively changed. He is in power, this is not a campaign. This is real life," she darkly warned.