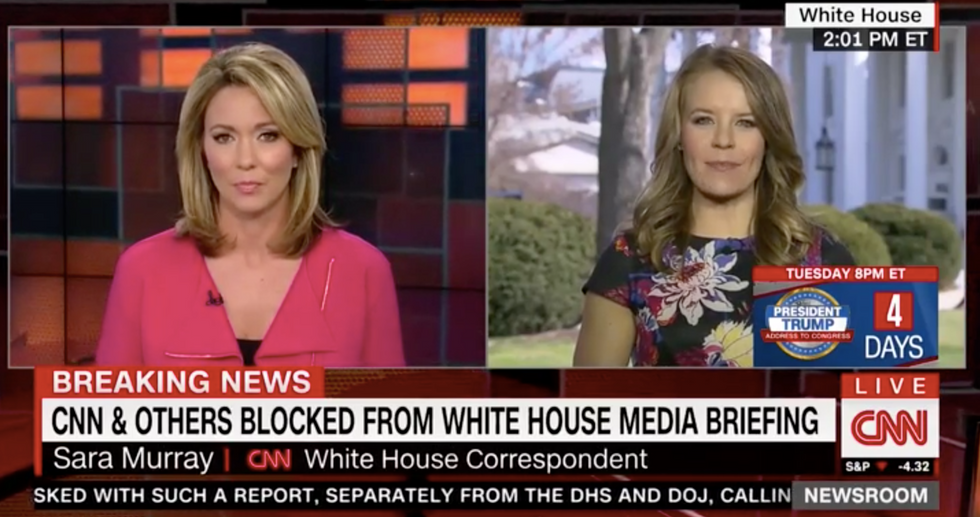 "This is not okay," Baldwin said, according to Mediaite.com.

For a normal small press briefing, Murray explained, the White House would welcome one person from each news organization. On Friday, the administration refused to allow CNN, the New York Times, the Los Angeles Times, Politico and BuzzFeed to attend.

Fox News, Breitbart, NBC, ABC and conservative newspaper the Washington Times were invited to the press gaggle. Time magazine and the Associated Press boycotted the press conference in a show of solidarity with the banned news organizations.

“It’s pretty clear that that is not what the White House wanted to do today,” said Murray. “And they wanted to select maybe news outlets that would be more favorable. Which, I do have to say Brooke, is kind of unfortunate.”

Pres. Trump spoke to the Conservative Political Action Conference (CPAC) on Friday in which he engaged in a prolonged rant against the media and promised "(W)e're going to do something about that."

Media watchers said Friday's speech was a campaign speech for a campaign that ended in 2016. CNN political correspondent Brian Fallon said that the president needs to turn his attention to actually governing and stop trying to re-litigate the campaign.