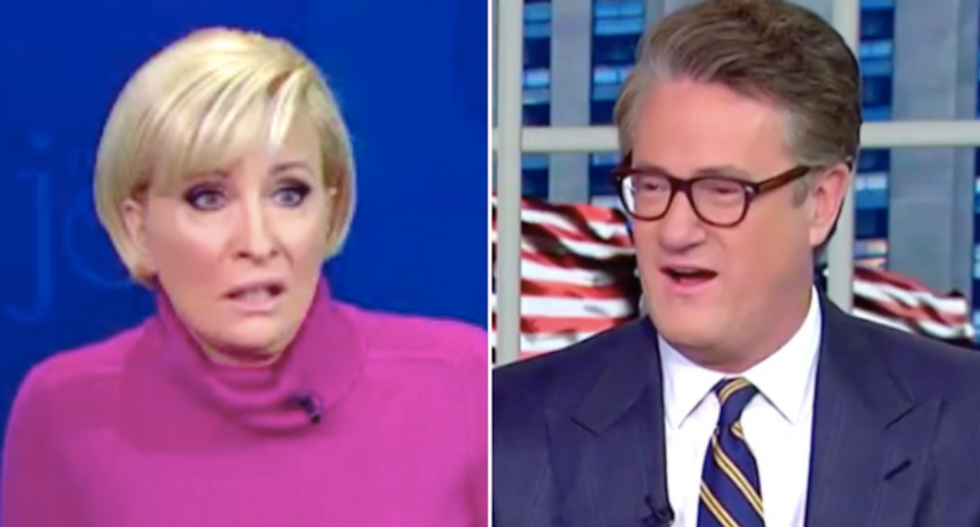 The "Morning Joe" host has been an outspoken critic of Miller, whom he has described as too inexperienced and immature for his position, and Scarborough and his fellow panelists were left speechless by the official's shouted claim that the president was "correct 100 percent of the time."

"Oh my God," said co-host Mika Brzezinski, who later suggested Miller should be fired in a tweet posted during the broadcast.

"Oh my God," Scarborough agreed. “It’s so much worse than I ever thought. Wow."

Miller recited the same talking points questioning "judicial supremacy" during appearances Sunday on news programs aired by ABC, CBS, NBC and Fox News, where he defended the travel ban he helped write and insisted the president's authority should not be questioned on matters of national security.

"(They are) questioned, my young, little Miller," Scarborough said. "They will be questioned by the court -- it’s called judicial review. Alexander Hamilton and James Madison wrote about it in the Federalist Papers, it was enshrined in Madison’s Constitution.”

The panelists were astounded that Miller, who appeared to be reading from a teleprompter script, was apparently sent out to argue those claims.

“That was the worst performance out of anybody,” Scarborough said. “That was horrendous, an embarrassment.”

Brzezinski reminded her co-host that President Donald Trump and his closest advisors "love this guy," but Scarborough said he needed to read the nation's foundational document.

"Go back and read the constitution," he said. "The White House has got to stop embarrassing themselves by putting this guy out there."

Scarborough said his performance was worse than then-United Nations ambassador Susan Rice after the 2012 Benghazi attacks.

"That was horrendous and an embarrassment," he said.

He warned that Trump, if he followed Miller's advice and disobeyed court rulings he didn't like, would be removed from office.

“We would have impeachment proceedings within the next six months, Donald Trump would be impeached,” Scarborough said.

He repeatedly used the word "autocratic" to describe the Trump advisor's political views, and he promised to share with his co-panelists -- but not viewers -- what Republican lawmakers had been saying about Miller behind closed doors.

“There are some anti-constitutional forces in that White House,” Scarborough said.

.@JoeNBC on Stephen Miller's weekend performance: That was horrendous and an embarrassment https://t.co/rE5Fxo8AF3