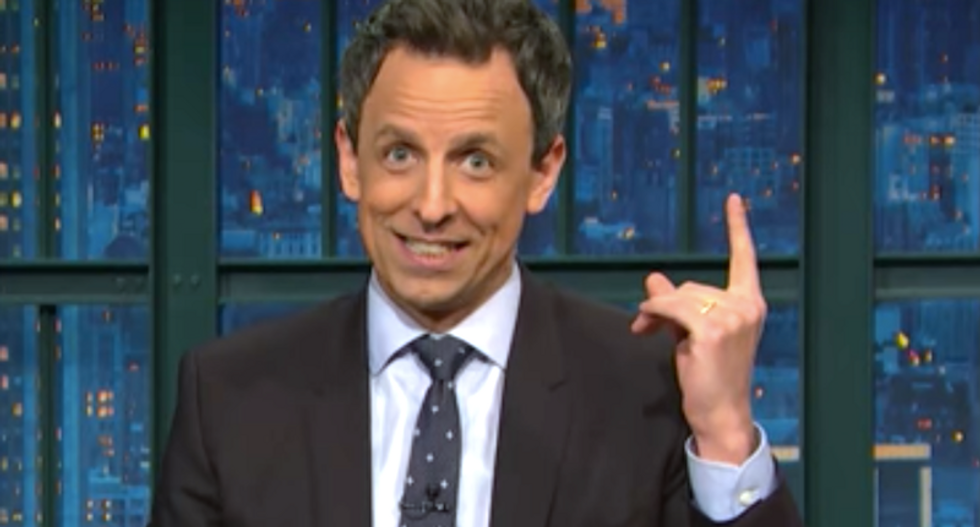 President Donald Trump shares his thoughts about almost everything on his Twitter account, but he hasn't once addressed the Quebec mosque shooting -- which Seth Meyers, like many others, finds a bit odd.

The White House has cited the shooting, which left worshipers dead, as justification for an executive order banning travelers from certain majority-Muslim nations, although the accused shooter was a native-born Canadian and apparent Trump supporter.

The "Late Night" host wondered why Trump hadn't tweeted about the shooting, even to offer condolences, but he was even more baffled by the White House explanation for his silence.

Senior advisor Kellyanne Conway explained Tuesday that the president hadn't commented because “doesn’t tweet about everything.”

Meyers then sipped a drink as a lengthy list of wide-ranging topics of Trump tweets scrolled onscreen.

Trump found time to tweet an attack against Nordstrom, which was cutting back on his daughter's clothing line, minutes after his daily intelligence briefing.

“Another worrisome thing about Trump’s tweet is that it was written at 10:51 a.m., but according to the president’s daily schedule, he was supposed to be receiving his daily intelligence briefing at 10:30 a.m.," Meyers said. "So, is Trump skipping out on an intelligence briefing to tweet about his daughter’s business?”

The White House press secretary, Sean Spicer, insisted the president had attacked the retailer on his free time -- but Meyers said that posed other troubling questions.

“OK, but here’s my question: why was he free when that happened? Did the briefing really take less than twenty minutes?” Meyers said. “I feel like the president’s daily intelligence briefing should take longer than an episode of 'Vanderpump Rules.' Also, if he was tweeting about Nordstrom right after the briefing, something tells me he wasn’t totally focused during the briefing.”

Conway kept the feud in the news Thursday by urging Fox News viewers to buy Ivanka Trump's clothing, for which she was supposedly counseled by White House officials and could face potential ethics violations.

“From now on, the only network Kellyanne Conway should be allowed on is QVC,” Meyers said.