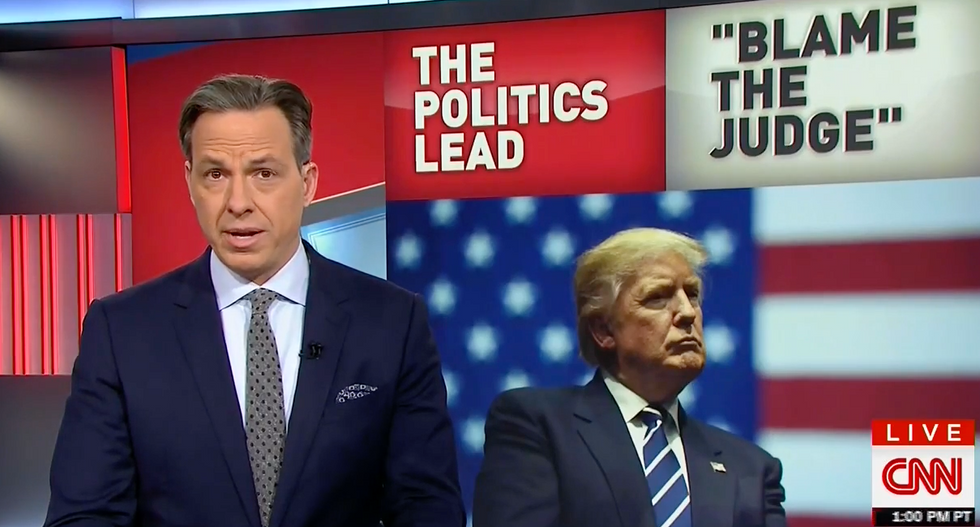 On Monday, CNN’s Jake Tapper targeted Donald Trump’s new string of attacks on a sitting federal judge, as well his continued assault on the media, pointing out the president is trying to undermine “fundamental pillars of our democracy.”

“President Trump’s tweets are windows into his soul: unfiltered, and often seemingly unmoored,” Tapper said on Monday’s “The Lead.” This weekend, we all got to take quite a gander.”

“Mr. Trump went on, ‘Just cannot believe a judge would put our country in such peril,’” Tapper continued, reading the president’s tweets. “If something happens blame him and court system. People pouring in. Bad!”

“Let me read one part of that again,” Tapper said, “Any negative polls are fake news, you got that? So any polling suggesting anything negative about the president or his policies is not, in his view, real.”

“Alright, to sum up: If a judge rules against the president, he’s a so-called judge,” Tapper continued. “If a poll shows that majority of you disagree with his policies, the poll is fake. If a well-sourced news story reflects something unflattering about him, that story is fake.”

“So the judicial branch of government and the free press—two fundamental pillars of our democracy—if we take actions he does not like, we are not legitimate,” Tapper said.

“Okay what about a known geopolitical foe of the United States, like say, I don’t know, Russian President Vladimir Putin,” Tapper asked, before turning his attention to Trump’s Sunday interview with Fox News' Bill O’Reilly.

“[Putin] is a killer," O'Reilly said to Trump during that interview.

"There are a lot of killers,” Trump replied. “You think our country's so innocent?"

“Whoa,” Tapper said. “As long as we all know where we stand, I suppose.”