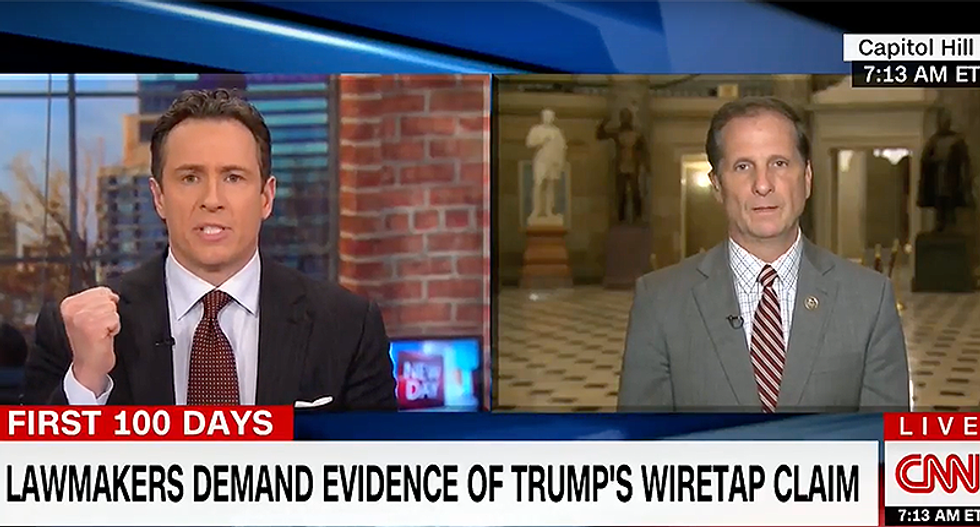 "You said whether or not Russia tried to interfere in the election," Cuomo said off of what Stewart commented. "The intelligence community put out a consensus report saying they know that Russia did hack during the election in order to disrupt the election. Are you questioning whether or not that happened?"

Stewart swore that he wasn't, but admitted he was in Moscow in August, around the time the Russian hack was being uncovered. He said that his committee began holding hearings in September on the hack and has been aware of what was going on for months.

"When we talk about it's hard to keep track of it do you believe the president of the United States, who is a phone call away from substantiating his own claim, if he wanted to, and in light of the fact that he has not, why don't you question them as whether or not they're just a tactical distraction."

Stewart said he doesn't believe every accusation made, however, he ultimately agreed that Trump could release the intelligence on what he alleges.

"One point of curiosity is whether or not you see the wiretapping claim as equal to others that are under your basis of analysis right now," Cuomo noted. Stewart said he didn't know. "But do you really see it on even par when you have the president come out of this with a tweet and says he just learned and there's speculation as to where he got it from media groups and he has the ability to make a phone call and get you the answer after accusing a former president of a felony and calling them bad or sick? Do you see that as the same as these known contacts between staffers and Russia?"

Stewart pivoted to talk about the Wikileaks document dump and the seriousness of the leaks.

Cuomo persisted, "I hear you that people deserve answers but I don't think that all speculation is created equally. If you want to talk about leaks of course you do. Leaking has nothing to do with wiretaps. The wiretaps have only come from one place, the president and a series of tweets. There's been no other allegation made in that regard that I know of. Can you put any more meat on the bones? Has any agency raised it or brought it up independent of what the president said?"

Stewart agreed that the accusations are serious but claimed he would get to the bottom of it.