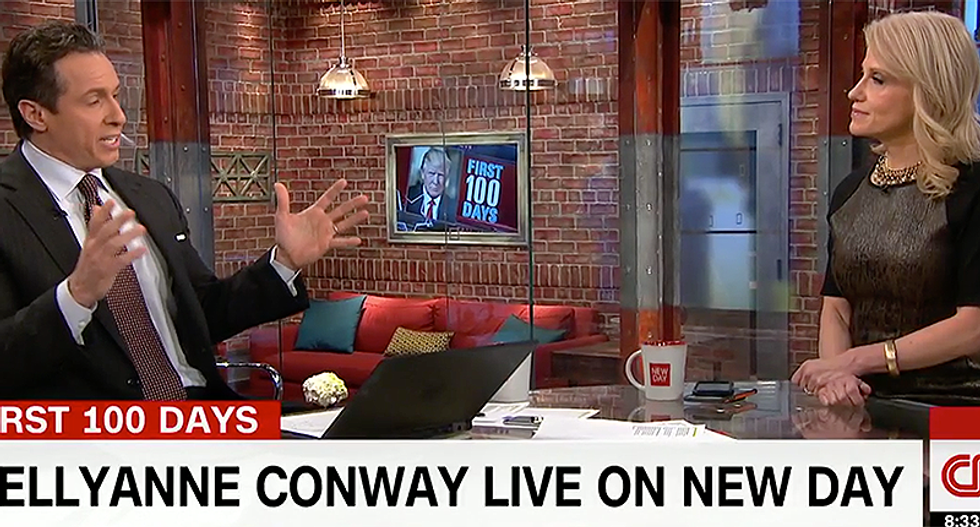 "I'm not going to discuss who he calls and who he didn't call," Conway said on Cuomo's show Monday morning.

"Sean Spicer did. He said he didn't reach out to him," Cuomo said, noting that the wiretap charge is fundamentally different than leaks and should be part of the investigation. "He could answer it himself. He could declassify what's out himself immediately. Nobody has more power than the president. Yet he hasn't made a call to [FBI Director James] Comey?"

"Sean Spicer did," Cuomo persisted, interrupting Conway. "We know [Trump] didn't reach out. Why not?"

Conway tried to put the blame on Comey before being cut off again. "Director Comey can also make a statement. He directed the DOJ--"

"Why would he make a statement, well, first of all he's going to testify at the hearing. But why would he testify about something that isn't happening?"

Conway said that members are expected to ask him about the allegations. Cuomo alleged that investigating that is taking time and resources away from answering other things and ultimately a distraction about looking into the Russia connections.

"That's my point, Kellyanne," Cuomo said. "Why would I ask you a question about why my kid went to bed last night? I could make a phone call and tell you what time."

She accused Cuomo of making a glib analogy.

"He can pick up the phone and get this answer!" Cuomo said.

"You realize what the crux of all this is, right?" Conway replied trying to pivot to leaks. "I hope you as an American are very concerned, as we all are, about the leaks coming from the intelligence and security community somewhere."

Conway tried to pivot to attack the Obama administration but Cuomo wouldn't let her get away with the distraction. She eventually said that she'd just let the president speak for himself.

Watch the full heated exchange below: