'Either they were criminally negligent -- or they weren't and they knew': Maddow calls BS on Mike Flynn excuses 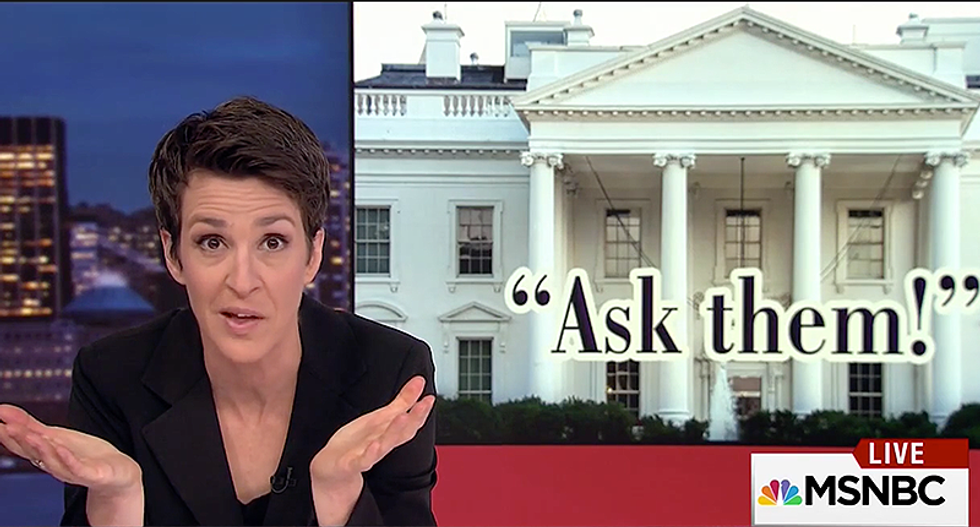 MSNBC's Rachel Maddow once again hammered President Donald Trump's administration for their claims that they didn't know anything about what was going on with Gen. Mike Flynn and Russia. The evidence is stacking up about Flynn's Russian dealings while working with Trump as are interviews with Flynn where he admits interaction with the Russians.

Flynn did an interview while at the Republican National Convention where he was asked about a speech he gave while in Moscow. The reporter asked him who paid him or how he got paid. Flynn tried to dodge questions that he was paid but eventually fessed up that he was and that his speakers bureau got the check so he didn't know who it was from. He stayed in a 5-star hotel right off of Red Square and brought his son Mike Flynn Jr. along with him.

Maddow continued that anyone who wants to do a speaking gig or be paid by a foreign government would have to get approval from their branch of the military. The U.S. Army indicated that their records say Flynn did not ask.

"Did they vet this guy at all when they made him National Security Advisor?" Maddow asked. "When they brought him in to sit in on the president's daily brief and all the other highly classified intelligence briefings he received alongside Donald Trump during the transition and into his time at the White House?"

Rep. Elijah Cummings (D-MD) has asked the White House to release the relevant parts of Flynn's application for security clearance.

"Did he hide these payments from Russia when he applied for a security clearance?" Maddow asked. "If he hid those payments why wasn't the White House able to discover them anyway? I mean, Mike Isikoff is a good reporter but he's not that good. He's not omniscient."

She continued, asking if he disclosed he'd taken the money from Russia how he could be appointed as the National Security Advisor, particularly if the money was illegal.

She noted that it has been a full month since Flynn was let go but there are still questions. Vice President Mike Pence maintained he knew nothing.

"There are increasing questions as to how on earth the Trump campaign and the Trump transition and White House could ever have hired him," she wondered. "Either their vetting was criminally negligent or it wasn't and they knew what they were getting with him and they wanted somebody like him around classified information which is inconceivable unless they've got a brilliant explanation for it."