'I'm not talking to bigots': Angela Rye tears into CNN for giving Joe Walsh a platform 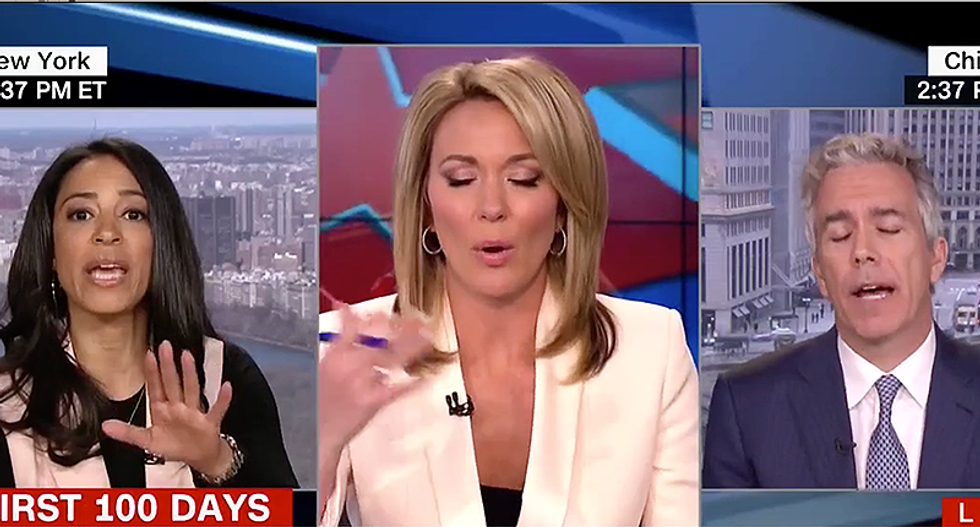 Former Rep. Joe Walsh doubled down on his belief the bar was lowered for President Barack Obama because he was black. After a Tuesday Twitter battle with Walsh, Democratic consultant Angela Rye called him a bigot again and again for the insulting claims.

Rye was forced to explain why Walsh's comments undermined Obama, when people of color often are forced to work twice as hard to prove themselves. She said that Obama cleared every hurdle thrown at him just as reporter April Ryan and Rep. Maxine Waters (D-CA) are forced to do each day.

"I am tired of difference being disrespected and mistreated by this White House," she continued. Walsh tried to cut in and say something to Rye but she held up her hand and told him, "I'm not talking to bigots, Joe."

Rye read Walsh's tweets from Tuesday and wondered why CNN "decided to give Joe Walsh a platform today. I'm not giving him the time of day. I'm interested in having conversations, Brooke, that will move racial people of all races forward in this country. I'm interested in having a conversation that will help us to admit the wrongs that were done in this country and how we move forward. I am not interested in trying to convince and change the mind of a bigot. Someone who will openly troll me and say things that are offensive, that he knows are not true."

Walsh tried to comment but Rye ultimately asked him, “are you going to say something while your mouth is moving?” Walsh seemed unable.

"I mean, it's very frustrating and I'm tired of people telling me that black people are beneath a standard when we have to be twice as good all the time," Rye explained. "And that is why I said, I'm not interested in having a dialogue with someone like Joe who has demonstrated a propensity towards bigotry. And he did that on Twitter yesterday in 140 characters or less."