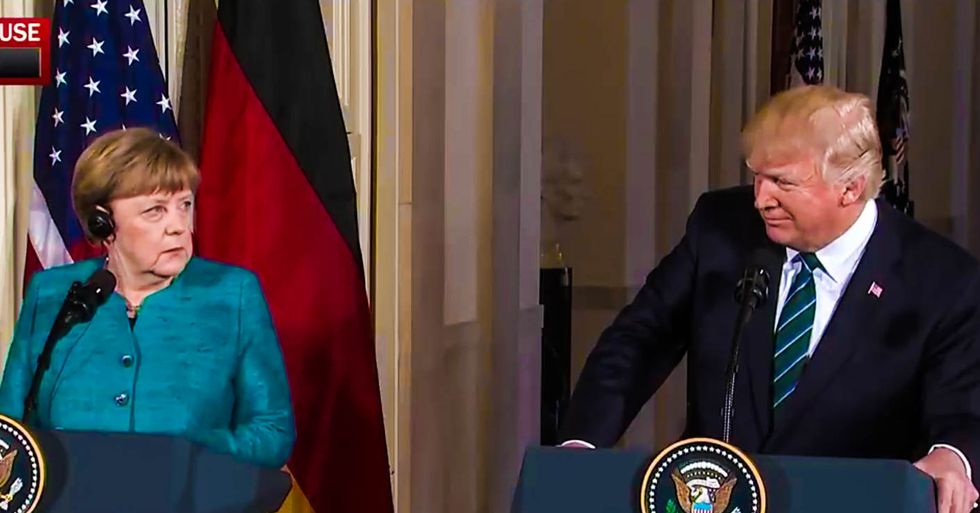 When President Donald Trump met with German Chancellor Angela Merkel last weekend he reportedly had a present for her in the form of an invoice demanding hundreds of billions in money he feels is owed to NATO by Germany.

According to the Sunday Times, German officials admitted that the chancellor received the invoice handed to her by Trump and called it "outrageous."

"The concept behind putting out such demands is to intimidate the other side, but the chancellor took it calmly and will not respond to such provocations," a German minister stated.

Following Trump's tense meeting with Merkel -- where the president refused to shake hands with her -- Trump complained on Twitter that Germany was not paying its fair share of NATO expenses, leaving the U.S. to make up the difference.

"Despite what you have heard from the FAKE NEWS, I had a GREAT meeting with German Chancellor Angela Merkel. Nevertheless, Germany owes vast sums of money to NATO & the United States must be paid more for the powerful, and very expensive, defense it provides to Germany!" the president wrote over two tweets.

According to the Times, the President submitted the invoice requesting over $300 billion in reparations based on the Trump administration's demand that Germany contribute 2 percent of their GDP dating back to 2012 -- plus interest.

A source close to Merkel said the German chancellor "ignored" the invoice, and dismissed Trump, saying, "The president has a very unorthodox view on NATO defense spending. The alliance is not a club with a membership fee. The commitments relate to countries’ investment in their defense budgets.”