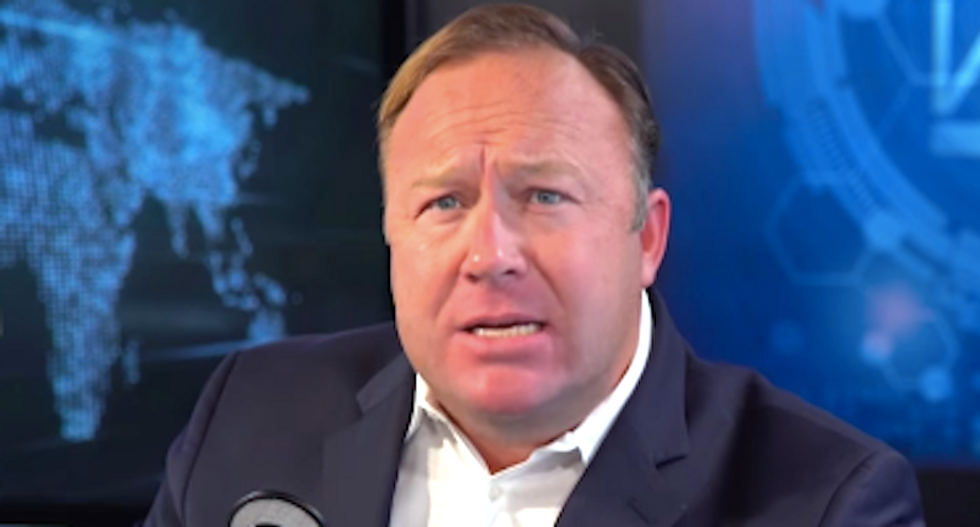 The InfoWars founder hosted the political dirty trickster -- who's under investigation for possible ties to Russian intelligence -- on his program Friday to discuss the military action.

The conversation followed a conspiratorial trail that led from Syria through the West Wing to the Upper West Side, and all the way to Silicon Valley, and fell apart when Jones blamed Kushner and his wife, Ivanka Trump, for every bad decision made so far by the president.

"It's them, it's them -- it's his daughter and son-in-law who are literally enemies of the Republic!" Jones shouted.

At the start of the discussion, Stone suggested the chemical weapons attack, which Trump used to justify the military action, might have been staged as part of a conspiracy to draw the president into war in the Middle East.

"What's interesting to me is this push by the generals, which I believe is aided by the president's son-in-law (Kushner), to essentially shed the non-interventionist position that he stuck to very closely in the campaign and become George W. Bush," Stone said. "The people, if they wanted a neocon, they would have elected Jeb (Bush)."

Jones blamed "President Kushner" for the torrent of media leaks from the White House, which he described as a "jihad" to go after "hardcore conservatives and patriots" like Steve Bannon for opposing the airstrike.

"I can absolutely certify that Steve Bannon was opposed to this intervention in Syria, and he obviously lost an internal argument," Stone claimed.

He said the White House blamed the chief strategist for the failures of the travel ban and the health care bill, which Stone claims was written by former House Speaker John Boehner and foisted on Bannon by Kushner.

"Bannon's a fighter, and I do think he will survive, but what we have to figure out is whether his role is diminished," Stone said. "One obvious problem is that he really hasn't spent any capital to bring other nationalists who supported Trump into the White House."

Bannon, in fact, has brought several of his employees at Breitbart News -- including an apparent member of a European Nazi group -- to work for him at the White House, although none of them is married to the president's eldest daughter.

"Unfortunately, Steve Bannon has not gone to bat for other nationalists, and therefore he finds himself on the White House staff largely without allies," Stone said. "My greatest concern, in all honesty, is watching the Silicon Valley barons wine and dine Jared and Ivanka -- the Google people, the Facebook people -- those who are seeking to choke InfoWars and Stone Cold Truth and Breitbart News and Daily Caller."

Jones agreed Kushner and his wife appeared to be part of a broad Democratic conspiracy to shut down right-wing sites -- which he described as guardians of the republic, and which the FBI is investigating for possible ties to Russian agents.

"If there's anyone on the planet who would understand this, it's Steve Bannon," Stone said. "I don't think Jared understands that if these censorship initiatives go forward, the chances of the president's re-election are zero."

Jones used a series of code words to warn his listeners that Kushner, who is Jewish, was trying to undermine his father-in-law, the president.

"He is surrounded by weak, foppish, left-wing New York socialites," Jones said, and Stone picked up the thread.

"Meanwhile, we see Jared dining with the head of Google with one of the toniest restaurants in Manhattan," Stone said. "This is more disturbing to me than anything else because the future of the Trump administration and his efforts to make America great again completely pivot off access to the 'net and the ability to rally the same people who elected him."

"I don't think his motives are bad, I just think his political judgment is not sound," Stones added.