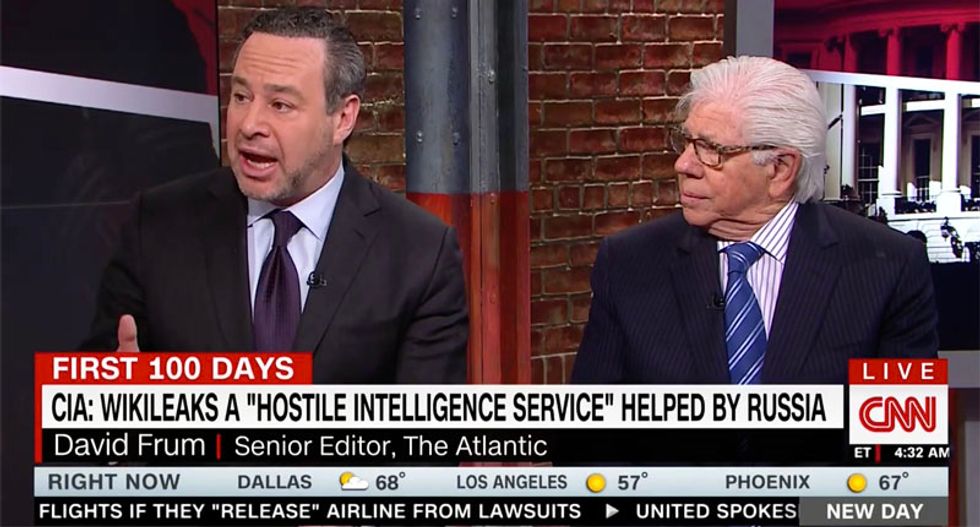 During a panel discussion on CIA director Mike Pompeo's accusation that Wikileaks is a "hostile intelligence service," two CNN contributors stated that it just adds to questions about Russian involvement with the Trump administration, with one adding that Trump's people must be terrified.

Appearing on New Day, Atlantic editor David Frum and famed Watergate journalist Carl Bernstein both stated that while former Trump campaign manager Paul Manafort is a primary suspect, it goes much deeper than that.

Asked why Pompeo was "making a point about talking about Wikileaks in these sort of sinister tones now?

"Because it is true and because we are in the midst of the huge series investigations of the whole question of what Russia did in our election campaign to interfere with the democratic system," Bernstein explained. "Part of the story are the Wikileaks disclosures that were aimed to destabilize us. Wikileaks was used, knowingly or unknowingly, by the Russians."

"Trump is part of right now trying to impede what we need to know about Russian did and collusion among people around him in the effort to destabilize our election campaign," Bernstein continued.

"Trump knows a good deal that he's not revealing," Bernstein stated later. "We are going to find out a lot in the coming weeks and months about the cover-up. There is really disturbing information that the president of the United States is trying to impede knowledge of what happened here of an attempt of a foreign hostile power to destabilize the electoral process."

Frum jumped in to defend the president to a degree, saying, "I think it is impossible that the president does not know what he is covering up."

"He knows there is a bad smell around Paul Manafort and he knows the Ukrainian ledger showed millions of dollars in payments to Paul Manafort from the pro-Russian dictator to Ukraine. It's now confirmed that that is real. We know the large sums did flow to Manafort," Frum stated.

"But exactly what the context was, it is very possible that other people in Trump world are terrified of what the information might possibly be," Frum continued. "They don't know the magnitude of the problem. It may be terrible, it may not be terrible, but they are trying to seal and control the story whose magnitude they themselves don't know."