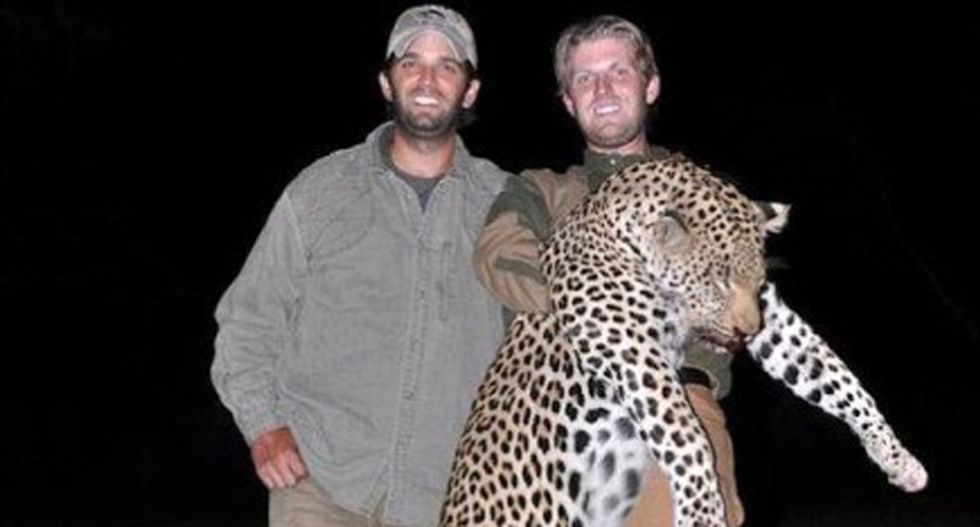 Donald Trump Jr. and his brother Eric are known for their passion for gunning down large African animals. In 2011, their tour company, Hunting Legends, posted images of the pair smiling with their trophies: a leopard, bull, waterbuck, crocodile, and even one holding an amputated elephant's tail next to the animal's body.

For prairie dogs, March through June is peak breeding season, which means pregnant adult females will also be at risk. This is particularly troubling because Black-tailed prairie dogs have an average of fewer than three pups per year.

These innocent creatures are shot for nothing more than target practice. In using high-powered weapons to kill prairie dogs, the animals can seem to explode or have body parts severed and sent flying.

While shooting prairie dogs in Montana is completely legal, it is not at all ethical.

“I was disappointed I guess that any national or international politician or celebrity would have the opportunity to come to Montana in the spring and their first choice of things they want to do is shoot prairie dogs," said Dave Pauli, senior advisor for wildlife policy at The Humane Society of the United States.

Black-tailed prairie dogs are known for having advanced social behaviors, including protecting each other by standing watch for other members of their social group and communicating with what Scientific American called "the most sophisticated vocal language ever decoded...Even better than chimps, dolphins and orcas."

While populations of prairie dogs naturally expand and contract, the species has experienced an overall decline of more 95 percent across their natural range. According to the Black-Tailed Prairie Dog Multi-State Objective Plan, Montana's most recent survey, taken in 2008, revealed the state is below its minimum objective levels for prairie dog conservation.

There are numerous factors contributing to the decline of prairie dogs, including poisoning and hunting, loss of habitat to human development and agriculture, the introduction of exotic diseases and climate change. All of these factors make it extremely difficult for prairie dogs to survive.

“Prairie dogs are an important keystone species with myriad other species dependent on their survival, including the burrowing owl, black-footed ferret and nesting birds. People do not hunt these animals for food or any legitimate wildlife management purposes,” said Lindsey Sterling Krank, director for the Prairie Dog Coalition of The Humane Society of the United States. “We have a duty to protect them to ensure that every species within the ecosystem continues to thrive.”

There is no legitimate wildlife management purpose to kill prairie dogs and people do not typically hunt prairie dogs for food. Prairie dogs—especially pregnant ones—deserve to be protected, not shot.