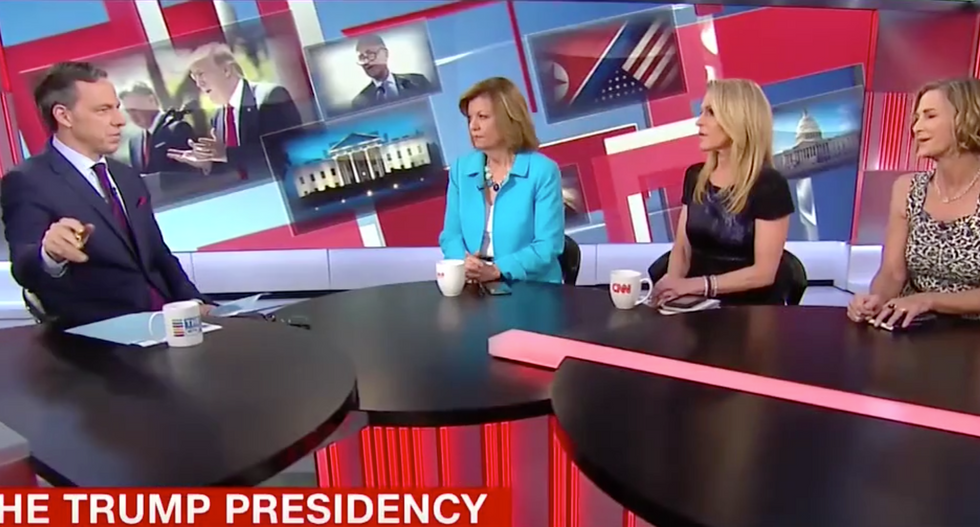 A CNN panel on Monday dismantled Donald Trump’s continued insistence that Barack Obama wiretapped Trump Tower during the 2016 presidential election, noting while the president’s “opinion” is that he was surveilled by his predecessor, “this is not about opinions, this is about facts.”

“John Dickerson brought up the apparently false claim that President Trump made that President Obama had him wiretapped at Trump Tower,” Tapper told his panel on Monday’s “The Lead.”

Tapper was referring to a contentious interview between Trump and Dickerson that aired on CBS Monday. After insisting he doesn’t “stand by anything,” the president walked off set when pressed on his unsubstantiated claim.

“‘Our side has been proven very strongly,’” Tapper said, quoting Trump. “Just for the record, it has not. There’s no evidence President Obama wiretapped President Trump at Trump Tower.”

Tapper explained there is “some evidence that there was some incidental collection of Trump advisers talking to Russians,” but nothing to suggest the Obama administration engaged in the activities they stand accused of.

“It is amazing to me that President Trump hasn’t backed off his tweet that President Obama wiretapped Trump Tower during the campaign,” USA Today’s Susan Page said, “As you say, there’s no evidence that that’s the case, but he continues to make the case—to say it’s true and to indicate that maybe it’s just a difference of opinion about whether it happened or not.”

“There’s no opinion here, there’s facts,” Tapper noted. “There was a FISA warrant, apparently, about Carter Page, who was an unofficial adviser then fired by the campaign.”

“There’s no evidence for what President Trump said,” Tapper added.

Alice Stewart, former communications director for Ted Cruz, noted that “to date, [Trump's claim] remains unsubstantiated, and I would imagine it will continue to be that way.”

“Look, when you make a claim like this about the former president, it should be based on fact not opinion,” Stewart continued. "And this was a wild, outlandish accusation and now he’s saying ‘I don’t stand by anything,’”

“When you make a claim like that, you should not only stand by it that way, months down the road, and you should jump up and down with flags if you feel so strongly about it,” she added.

“This is not about opinions, this is about facts,” Tapper said.