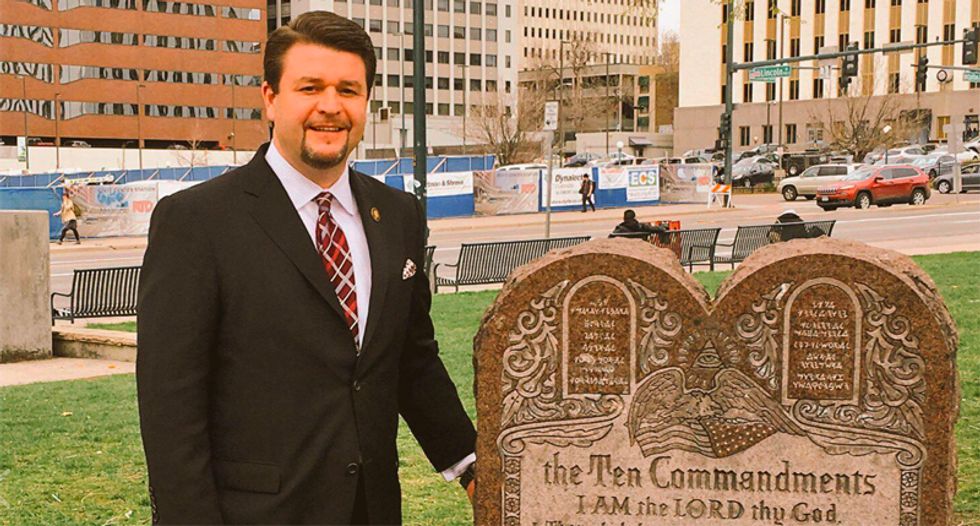 An Arkansas lawmaker has lashed out at a local reporter,  saying that calling out his anti-Muslim posts  on Facebook has painted a "target on him" and  is putting his family at risk.

According to Max Brantley of the Arkansas Times,  State Sen. Jason Rapert (R) claims the Brantly has been "careless" with his tweets pointing out that Rapert has posted videos on his Facebook page that call for violence against Muslims.

According to the Republican lawmaker, posting the videos is not "'touting' or promoting - it is simply sharing."

"You persist in being careless. You played fast and loose with the truth," Rapert wrote to Brantley. "So now the national support group for all things Islamic has put a target on me as a result of YOUR messaging. I hold you personally responsible if ANY threats come against me and my family as a result of this."

Rapert added, "You are as dangerous with your pen as a terrorist with a weapon."

As Brantley points out, The Inquisitr has also called out Rapert before, noting that in September of  last year the Arkansas lawmaker called for  anyone who supported the rights of Muslims — labeling them "Muslim sympathizers — to be "rounded up."

Following a bomb attack in New Jersey, Rapert wrote -- in a now-deleted Facebook post, " Regardless of who is responsible for these events today – we need to round up every single Muslim extremist sympathizer and other anti-American crazies and detain them or deport them. And for goodness sake – stop bringing more Muslims into this nation."

Earlier this week, Rapert posted a video from Fox News contributor Todd Starnes complaining about a school designating two rooms into prayer rooms for Muslim students. Rapert went well beyond "simply sharing" -- adding his own commentary to the Facebook post.

"It should be highlighted and understood why they are encouraging Islam which is a cult of death and violence against all non-Muslims," Rapert wrote before adding, "America in distress."

In his note to journalist Brantley, Rapert vowed that he is "forever resolved" to keep posting on Facebook despite his feelings that his family is imperiled.