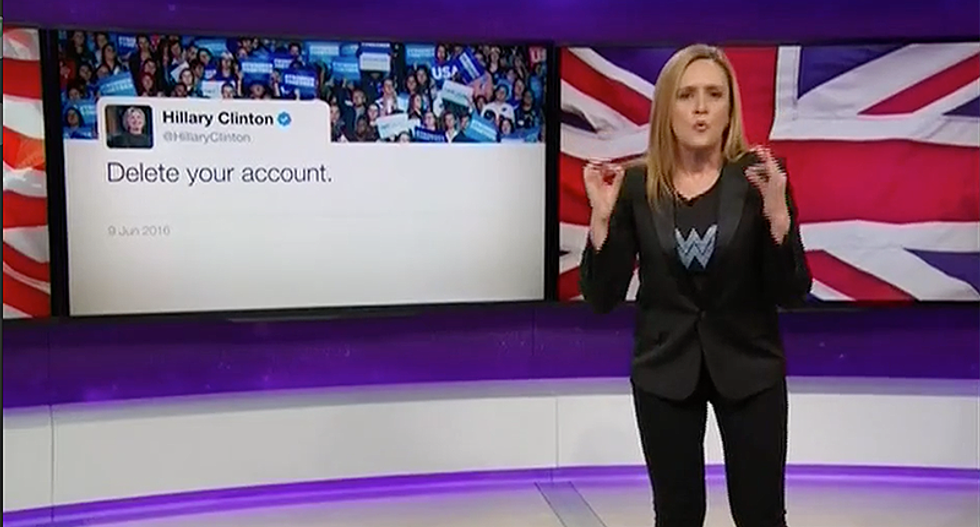 This week's "Full Frontal" brought with it a renewed urging for President Donald Trump to delete his Twitter account after he attacked London Mayor Sadiq Khan.

"What is wrong with you?!" she exclaimed. "Were you fulfilling your annual Ramadan tradition of hurling insults at grief-stricken Muslims whose last name is Khan?"

While our allies rallied around the British as they dealt with the tragedy, the president of the United States of America took another route. It was certainly different from what happened after 9/11 when the world joined together behind the U.S. in support.

"It's not a surprise Trump reacted by raging against an ally and jabbering about his stupid travel ban in a series of future Supreme Court exhibits," Bee said. "Trump is the only senile old man in the world who's actually correct that the TV is talking to him. And his favorite show has been serving a breakfast of scrambled Islamophobia apparently on a strict hourly thing."

Bee then showed a clip of Fox News, which proclaimed they were giving the terrorism update on the 27s of the hour. The comments that followed were a slew of lies about Muslims celebrating Ramadan by killing Americans and how American civil liberties would eventually kill America. After airing an onslaught of anti-Muslim interviews, co-host Steve Doocy asked if it was time to renew the surveillance of mosques.

While Trump was tweeting and Fox News was celebrating every word, his surrogates were all over TV telling the media that his tweets shouldn't be taken seriously.

"You want to keep America safe, Mr. President? Here's a thought: staff your government, read a book and for the love of God, take the advice a woman gave you exactly one year ago and delete your f*cking account!" Bee closed.