‘Dude, this is not Comicon’: Right-wing militia violently chases off ‘alt-right’ protester in Houston 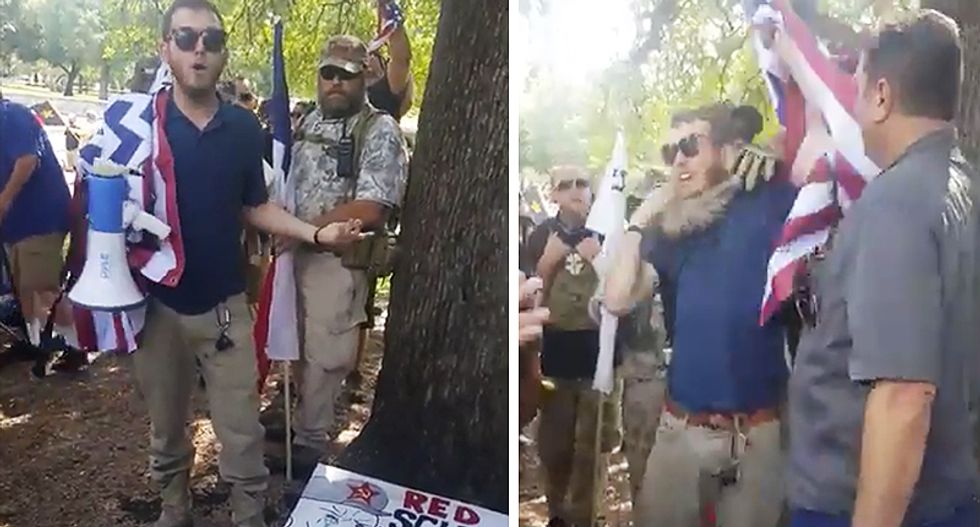 An armed man appears to place a protester with an American flag featuring Nazi symbols in a choke hold during a protest at the Sam Houston statue in Houston, Texas.

A video of the incident was posted by an anti-Semitic YouTube account that appears to be supportive of the alt-right. It showed the chokehold lasting for about five seconds, The Houston Chronicle reported.

The man with the flag had been carrying a megaphone as well as signs with alt-right imagery like "Pepe the Frog" and "No blood for Israel." A woman from the crowd can be heard saying that the protest was about the monument.

"Dude, they're not taking the monument down," he can be heard saying. "These are good memes."

A crowd gathers around him.

"Dude, this is not Comicon," a man off camera can be heard shouting.

"I know, what is it?" the man asked rhetorically. "I thought I was just coming to make friends."

The account that uploaded the video titled it accusing an Oath Keeper of choking the man. The Oath Keepers are the group that typically arrives heavily armed at protests. They claim that their presence is to "prevent dictatorship," but the Southern Poverty Law Center labels them as "one of the largest radical antigovernment groups in the U.S. today."

After the event escalates, he eventually is escorted away from the protest as demonstrators chanted, "Na, na, na, na. Hey, hey, hey. Goodbye."

The victim has not yet filed a report and police told The Chronicle there's nothing they can do until the victim comes forward.