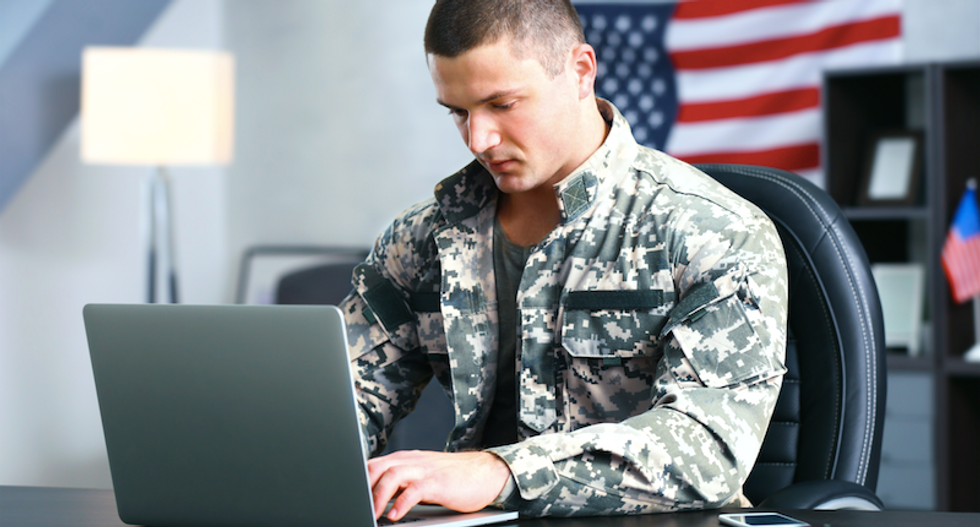 Russia is deliberately targeting active and former U.S. military service members in a variety of ways to promote the Kremlin's agenda and steal information.

Law enforcement investigations have focused on Russia's efforts to disrupt the 2016 election, but it's clear to many intelligence experts that the Kremlin has been using social media to soften the American military and even turn some service members against the U.S. government, reported Politico.

The Department of Homeland Security angered Republicans during the Obama administration by warning that domestic extremists would recruit returning military veterans, but Russia has been aiding those efforts through "active measure" propaganda campaigns.

Politico's report focuses on the website Veterans Today, which was founded in 2003 to oppose the invasion of Iraq and quickly grew into a conspiracy theory clearinghouse aimed at former and active-duty military members.

Much of the site's original content is, according to its chairman, literally "fake news."

"About 30 percent of what’s written on Veterans Today is patently false," site chairman Gordon Duff said in a 2012 interview. "About 40 percent of what I write, is at least purposely, partially false, because if I didn’t write false information I wouldn’t be alive."

Russian President Vladimir Putin has intentionally tried to create an "alternative media ecosystem" to promote Kremlin narratives in the West and destroy "the Anglo-Saxon monopoly on the information stream."

Much of those efforts, according to the Politico report, are aimed at the American military community -- especially after NATO expanded and the U.S. imposed sanctions against Russia for its annexation of Crimea.

Veterans Today counts 45,000 Facebook followers and claims more than 900,000 unique visitors a month, neither of which is a hugely impressive figure, but experts believe those types of websites wield a pervasive influence.

"I used to think it, and others like it, were quite fringe, said Kate Starbird, a University of Washington professor who studies Russia's alternative media. "But the intentional targeting of U.S. military, active and retired, seems to be a strategy of information war. I have anecdotes from friends, family members and now strangers who tell me about their family members who are deeply engrossed in this information ecosystem."

"Veterans Today and Veterans News Now will not cause soldiers, marines, airmen, or seamen to defect or become pro-Russian, not by themselves," Harding said. "But if someone regards them as a reliable source of truthful information, does not recognize that they are pushing Russian propaganda or information with a pro-Russian perspective, over time they will change."

That's already happened among Republicans since summer 2015, when former FBI director James Comey has said the Kremlin stepped up its propaganda efforts within the U.S., according to another Politico report.

Republicans and Democrats used to agree that media criticism could hold political leaders accountable, but that view has dropped 35 points among GOP voters since early 2016.

Much of those shifts in opinion, according to intelligence and cybersecurity experts, can be attributed to Russian active measures that were promoted by Donald Trump on the campaign trail.

According to one recent analysis, the same Kremlin-backed hackers who breached the DNC have been targeting current or former members of the military and their spouses -- especially military spouses who blog about military life.

"People popping up on veterans’ sites and singing the praises of Putin, you can guarantee those are trolls and part of the army that’s sitting over there attacking us every day," said Serena Moring, a former military contractor who has begun studying Russian propaganda after seeing it filter into her own social media feeds.