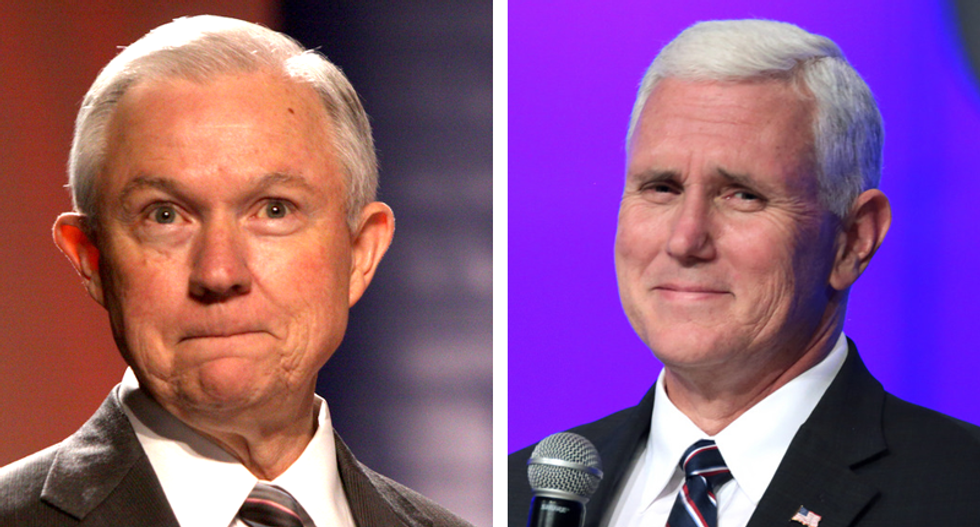 The former FBI director declined to say Thursday in his highly anticipated congressional testimony whether Trump himself was under investigation in the widening probe, but lawmakers' questions suggested both Pence and Sessions could be.

Comey told lawmakers that disgraced national security adviser Mike Flynn was in "legal jeopardy" when Trump asked him to back off the FBI investigation of his trusted campaign adviser's possible ties to Russia.

He testified that Trump's expression of hope that he would halt the investigation seemed to be, in his opinion, a directive -- which could provide evidence of intent to obstruct justice.

"I took it as a very disturbing thing, very concerning, but that's a conclusion I'm sure the special counsel will work toward to try and understand what the intention was there, and whether that's an offense," Comey testified.

But other lawmakers questioned him about Pence and, especially, Sessions -- who recused himself from overseeing the FBI investigation after his undisclosed meetings with the Russian ambassador were reported.

Pence has repeatedly claimed he was unaware of concerns about Flynn until shortly before he resigned over secret communications with the Russian ambassador -- but Comey disputed those assertions.

"My understanding is that he was," Comey said. "I'm trying to remember where I get that understanding from. I think from acting attorney general (Sally) Yates."

Yates notified the White House counsel Jan. 27 that the Department of Justice was concerned Flynn was vulnerable to blackmail.

Comey was not sure if Sessions knew about those concerns before he was sworn in, four days before Flynn resigned.

Several senators were highly interested in Sessions and the role he might have played in Comey's firing -- but Sen. Kamala Harris (D-CA), in particular, zeroed in on the attorney general.

She asked Comey whether Sessions had access to any of documents related to the investigation in the two weeks between Flynn's resignation and the attorney general's recusal.

Comey wasn't sure if Sessions had, but he admitted it was possible.

Harris then asked if the attorney general played any role in the Russia investigation after his March 2 recusal, and Comey said he could only assume that Sessions had not.

Comey also told Harris that he could only rely on public statements about Sessions' recusal because the Justice Department did not issue any written notice or memorandum describing the process that he would follow to stay away from the investigation.

"I know he had consulted with career ethics officials that know how to run a recusal at DOJ, but I don't know what mechanism they set up," Comey said.

"It's something that I can't answer sitting here, but it's a reasonable question," he said.