‘Nothing I have said is crazy’: All hell breaks loose on Morning Joe when Mika brings up the ‘p*ssy’ tape 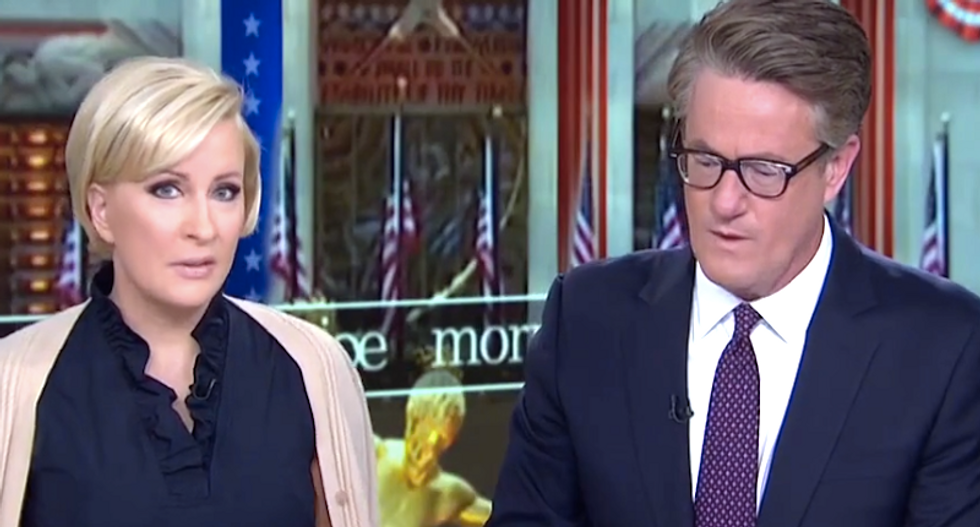 MSNBC's Mika Brzezinski made her colleagues -- all men -- uncomfortable by reminding viewers that President Donald Trump had bragged he could sexually assault women with impunity because he's famous.

The "Morning Joe" co-host argued that Trump's actions throughout the Russia investigation suggested he was either covering up a crime or, most charitably, suffering from a mental illness.

"He's not well, at the very least he's not well, and he's so narcissistic he does not believe the rules apply to him," Brzezinski said. "That's where the ignorance label may apply, because this is a man who says he can grab women anywhere because he's famous."

Host Joe Scarborough then tried to cut her off, and then talked over Brzezinski's explanation with the other men on the panel.

"I think there's an innuendo to perhaps the other sex, but everyone has their ideas about what he said," Brzezinski said. "The point is, he thinks he can say or do things different from the norm because he's famous, is a celebrity, has power. It's going to come down to something. We don't know if it's obstruction of justice, we don't know if it's abuse of power. We don't know if it's utter stupidity, but he may not be able to be in that office."

Brzezinski finally turned to Scarborough, who was tapping a newspaper on the desk and looking at other panelists as she spoke

"Nothing I have said is crazy," she said, and Scarborough told her they'd discuss her comments during the commercial break. "I was watching the show while I was gone (earlier this week) -- you have all said what I said."

Scarborough, who questioned Trump's mental health earlier this week, insisted none of them had diagnosed the president as a narcissist.

"Nobody has ever said what you just said," Scarborough said. "That doesn't wash. As you said, first of all, he's been sued his entire life, he knows this process. Secondly, he's had a lot of people that have been taken down by the FBI. He understands that process. But most importantly, he and Gen. (Mike) Flynn were hazing Hillary Clinton for a year and a half about her FBI investigation. They're well aware of the consequences of this."

Brzezinski insisted she hadn't gone out of bounds, and argued that her colleagues had all made similar claims -- at least off the air.

"Everything I have said you have thought and you know, and you have said in your own way," she said.

"Here's the great thing -- we keep it up here," Scarborough said, tapping his head.