WATCH: Kellyanne Conway admits to CNN that Comey tapes may exist — but Trump doesn’t have them 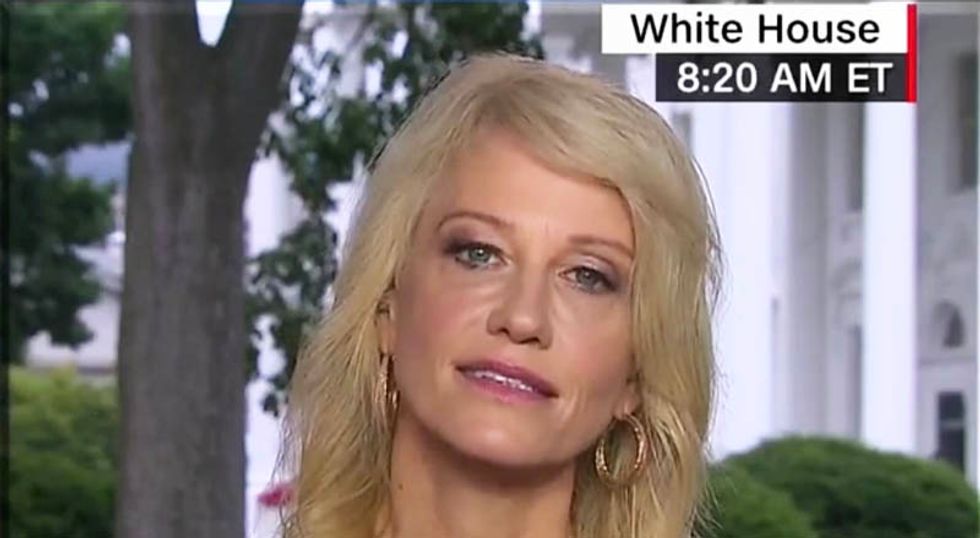 During a combative interview with CNN's Alisyn Camerota, White House counselor Kellyanne Conway refused to say why President Donald Trump waited 42 days before admitting he did not have secret Oval Office tapes with ex-FBI director James Comey on them.

After battling with host Camerota over the Russia investigation, the conversation turned to the tapes Trump hinted he might have -- only to admit on Thursday that they don't exist.

"Why did the president 42 days ago suggest that there might be audiotapes of his conversations with James Comey?" Camerota asked.

"So the president made clear yesterday and in an interview aired early this morning, Alisyn, on Fox News, that he doesn't have tapes -- didn't make tapes, but --," Conway replied as the CNN host cut her off.

"Why did he suggest 42 days ago he did?" Camerota pressed.

"He left open the possibility they may exist," Conway deflected before adding, "So much surveillance and leaking going on, conversations he had early on in his administration with heads of state that were leaked by who knows. I guess intelligence officials, but we don't know for sure and should be concerned."

"He cleared it up in due course," Conway parried.

"But why did we live this charade, there might be tapes or might not?" Camerota pressed again.

"There was no charade," Conway shot back.

"Answer definitively -- there were no audiotapes?" the CNN host asked.

"Why didn't he answer it sooner?" Camerota asked again.

"Why is he always on your timeline?" Conway deflected before asking why the media refuses to report on the good things Trump has done as president.

"The president played a, cat and mouse game for 42 days about this, are there audiotapes or are there not audiotapes," Camerota gamely tried one more time. "Was that a good use of all of our time?

"Well, you choose to spend your time on your show however you wish. He's busy doing many things here," Conway smirked.