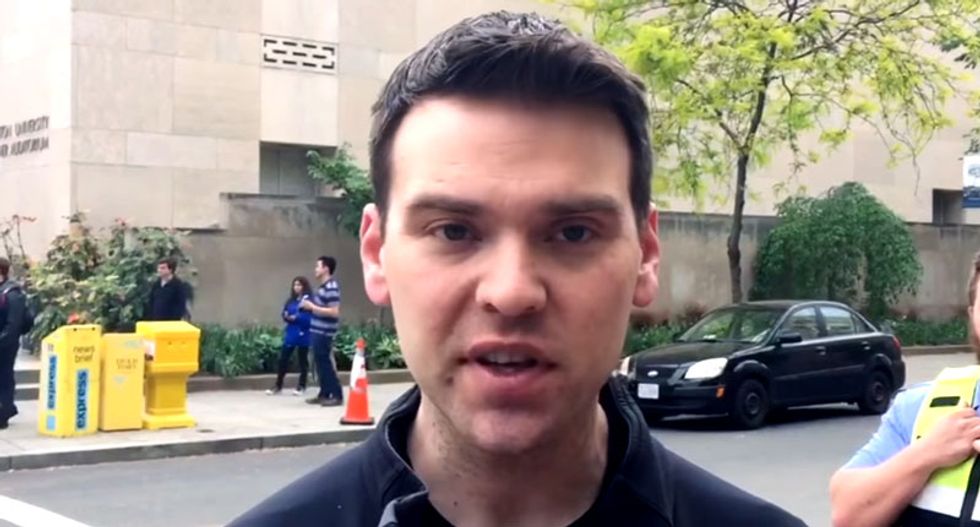 A notorious alt-right troll and conspiracy theorist has once again been caught red-handed trying to frame his political opponents, this time smearing supporters of Wednesday's Net Neutrality Day of Action.

Jack Posobiec was caught last year trying to discredit the left by planting a "Rape Melania" sign at anti-Trump protests.

Now Posobiec has once again been busted.

Posobiec was exposed by Brian Tashman, an ACLU researcher.

So-called “false flag” operations originally referred to covert naval warfare, but the term has since been expanded to refer to any effort designed to deceive observers into believing the activities were the work of enemies.

"Trump administration-appointed FCC Commissioner Ajit Pai has recently taken steps to roll back net neutrality protections, which would allow internet service providers like Verizon and Comcast to artificially slow access to some websites in favor of their own," The Beast explains as to the motivation for the false flag operation. "Posobiec came to prominence in part by peddling the Pizzagate conspiracy theory, which falsely claimed a child sex ring run by Hillary Clinton and her campaign manager was operating in the basement of a pizza shop that has no basement."

Posobiec also interrupted a Shakespeare play in New York's Central Park because of his support for Donald Trump.

Prosobiec was also one of the organizers of an alt-right rally for President Trump, but even Posobiec admitted the turnout was pathetic.