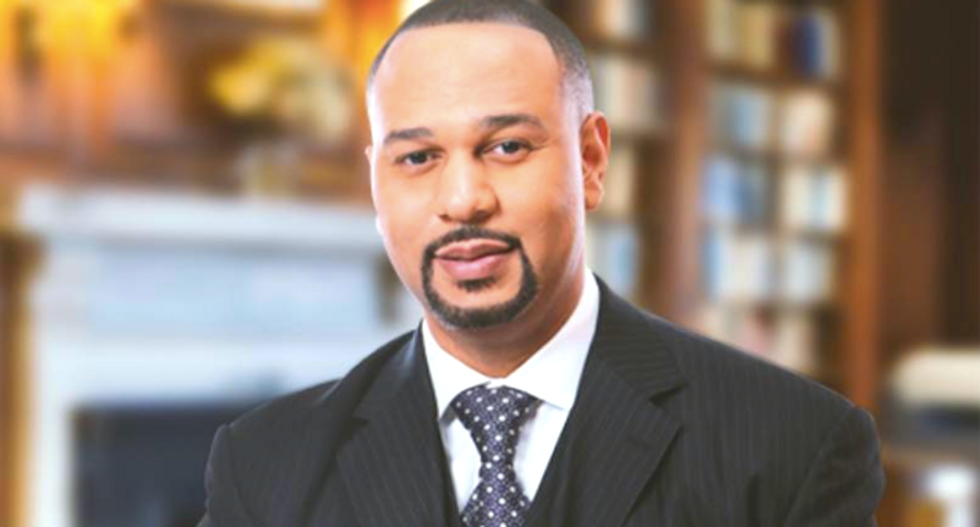 A black Mississippi judge ordered the removal of the state flag with its Confederate emblem as his first act from the bench.

Carlos Moore is the first African-American municipal judge in Clarksdale, and he marked his first day by ordering police to take the flag from his courtroom, reported WATN-TV.

"It was such a great feeling to see the police officer drag the despicable flag from the courtroom during open court," Moore posted on his Facebook page. "Great first day!"

He explained to the TV station that the flag symbolized racist oppression, and he wanted everyone who appears in his court that they will be treated fairly.

"That flag does not stand for justice," Moore said. "With that Confederate emblem it signifies that the state supports the sordid history of enslaving African-Americans as well as killing them and raping them."

Moore has been involved in legal cases involving Confederate imagery prior to taking the bench.

He filed a federal lawsuit last year seeking an injunction to stop the state from flying the flag and to rule its design unconstitutional, but a federal judge rejected the case.

"The flag is now down on all of the eight public universities," Moore said. "It's continuing to come down day by day, and one day my daughter will see a state where the flag no longer flies on any government property."

Moore also filed a lawsuit against state Rep. Karl Oliver (R-Winona) who called for elected officials to be “lynched” for removing Confederate flags and monuments from public display.

The activist-turned-judge asked a court to order Oliver to read the books, “The Blood of Emmett Till,” by Timothy Tyson, and “At The Hands of Persons Unknown: The Lynching of Black America,” by Phillip Dray.

Oliver's attorneys have argued that Moore lacked standing to sue the lawmaker without naming the state as a defendant.

"History is history," replied Judy Carr, in all caps. "How would you like to say your upbringing was wrong and offended people?"

"If the confederate history is eliminated by people like you then slavery never happened as did the holocaust or Hiroshima or Pearl Harbor or 9-11 ," said Jerry Cranford. "History should never be forgotten. Black should look at where they come from and want to be reminded of their progress instead of ignoring it."