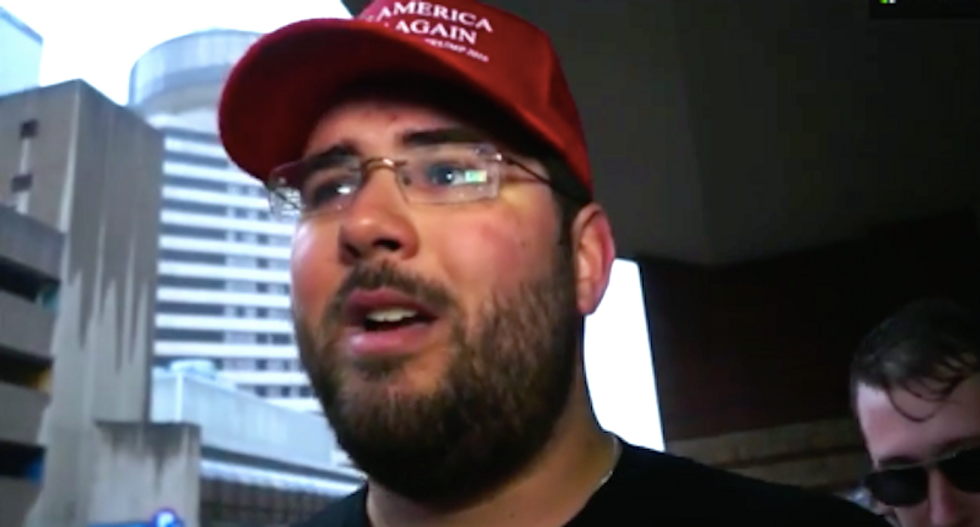 Matthew Heimbach, the leader of the now-defunct Traditionalist Workers Party. Image via screengrab.

A Louisiana man identified as the "leader of a white nationalist group" has plead guilty to physically harassing a black protester during a Trump rally in Louisville in 2016.

According to Louisiana's Courier-Journal newspaper, 26-year-old Matthew Heimbach, who chairs the Traditionalist Worker Party, pleaded guilty in his charge against physically harassment and disorderly conduct against Kashiya Nwanguma at a March 2016 rally.

During the campaign rally, Heimbach was caught on video yelling and pushing Nwanguma, and the video later went viral.

Wednesday's sentence comes as an amendment to an earlier misdemeanor charge of harassment with physical contact. He'll pay a $145 fine and is sentenced to no contact with Nwanguma and anger management courses. His initial charge carried 90 days of jail time, which a judge waived.

Heimbach claimed that he no longer supports Trump, but that he doesn't regret his actions last year.

"Given that Mr. Trump has now bombed Syria and has betrayed a lot of his campaign promises, I wish I had never been there to support him in the first place," Heimbach said after a June hearing. "But when it comes to the conduct of that day, no regrets."

He also cited Trump's rhetoric as a sort of rallying point for violence at his events.

"It seems pretty clear to me based on the other rallies and the rallies afterward that Mr. Trump had an expectation of deputizing the crowd to be able to help provide security as these disruptions were happening where there was violence against Trump supporters," Heimbach said.

The Southern Poverty Law Center has a page dedicated to Heimbach's extremist views, which they call "neo-Confederate." Heimbach's quotes also paint him as homophobic and anti-Muslim.

Watch Heimbach discuss his views with reporters below, via the Courier-Journal