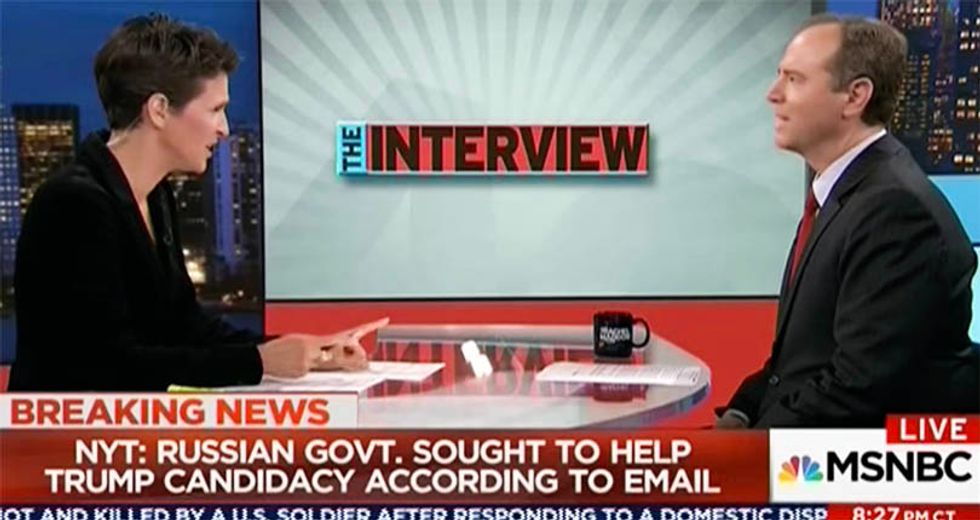 Putting their heads together, the MSNBC host and House Democrat re-created a timeline showing Trump family contacts with the Russians -- and denials --  that could only be described as collusion.

Asked by Maddow if the email is a "significant development," Schiff slow-walked through what is known so far.

"I think we need to look at this in the chronology," Schiff began. "And that is this goes back to June of last year just when the now-president has essentially seized the Republican nomination. If this article is correct, his son gets an e-mail from somebody who helped the Trump family, saying 'the Russian government is helping your father get elected president, we have some damaging information, you should take this meeting.' Donald Jr. takes the meeting with this woman who's an advocate for the Kremlin along with [Jared] Kushner and Paul Manafort. During that meeting she brings up the Magnitsky Act, which is a bill that provides sanctions on human right abusers in Russia, something that Putin hated."

"After that meeting we know what happens in terms of the hacking and dumping, the dumping of documents," Schiff continued. "This meeting purportedly was in June. In July the Russians start dumping data helpful to Donald Trump, hurtful to Hillary Clinton. And then, you know, flash forward after the election. The investigation starts and the family is asked, the president is asked, 'did you have any meetings with any representatives of the Russian government?' The answer is 'no, absolutely not, not in a million years.' And then Donald, Jr. is asked, 'well, what about this meeting?'"

"And in a pattern we have seen over and over again, when confronted with evidence of particular meetings, they're forced to acknowledge, 'yes, we did have those meetings.'"

"You know, one of the things it makes me wonder, first there was no collusion, then there was this shift to 'okay, even if there was collusion, that's not a crime.' Now, what I wonder when these stories started coming out is these stories don't appear in a vacuum," he elaborated. "The reporters who write these stories often will go to get a comment or feedback and so the family might know these stories are coming out. Does this account for the shifting narrative away from there's no evidence of collusion to collusion is not a crime? I don't know. The reality is conspiracy is a crime."