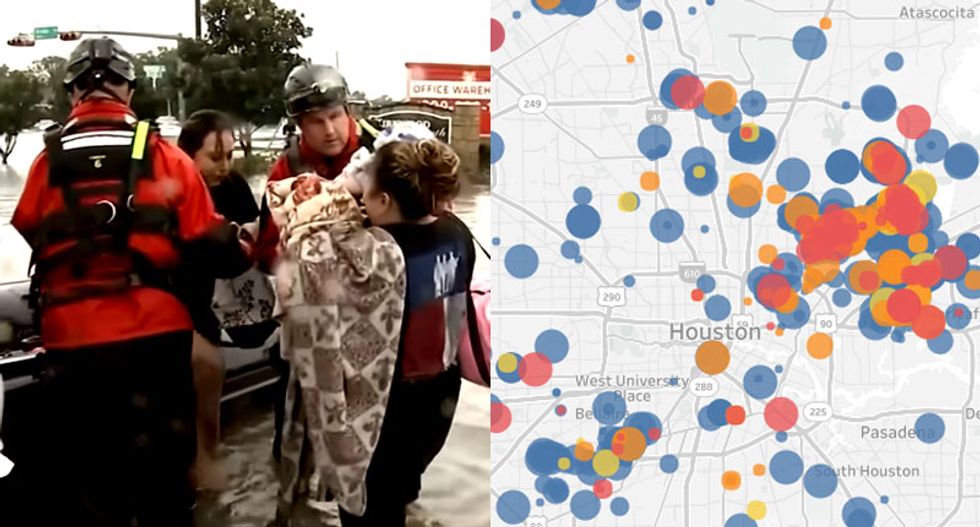 A collective of government employees have worked to help emergency responders trying to help in the wake of Hurricane Harvey to navigate multiple requests from several different places with a crowdsourced rescue map.

President Donald Trump has attacked career government staffers as "holdovers" from President Barack Obama's administration and his department heads have pledged to root out such staffers. Trump also placed restrictions on scientists and staff to prevent them from publishing their taxpayer-funded research findings. The two incidents prompted a series of government employees to start secret Twitter accounts known as "alternatives" to the Trump government. While there is no evidence that some kind of coup d'etat exists nor is a cabal being coordinated by the former president, Trump continues to attack the employees.

The digital army of Alt-gov staff saw the aftermath of Harvey and recognized a desperate need to help survivors as soon as possible.

"There's a massive gap in emergency rescue right now," one staffer who wanted to remain anonymous told Raw Story."The 911 system can't handle this volume of rescue calls, and cities and federal agencies don't yet have a system for responding to SOS calls on social media. So we created it for them."

The @HarveyRelief account and HarveyRescue.com site pulls together a list of all of those begging for help on social media, who might not have been able to make it through the 911 backlog, busy signals and holds. Those sending out "SOS calls" and tagging them #HarveySOS are being curated into the map. Roughly 100 individuals have been helping first responders with boat rescues. It is their hope that the site can help save people's lives by making searches and rescues more streamlined, telling boats where they need to go.

"Our volunteers are specifically coding the data in the ways that USCG and Cajun Navy have requested," the Alt-Gov staffer explained. "I can't say enough about the amazing volunteers who offered to help. They have taken on huge leadership roles and helped @HarveyRescue ramp up to a place we never imagined."

The decision was made on Sunday when the Alt-Gov community members were talking about some of their team living in Texas.

"We were seeing that city, state and federal authorities were telling Houstonians to call 911 for rescue and not reach out via Twitter," the staffer explained. "But there was a major disconnect - people couldn't reach 911 and were pleading for rescue on social media."

The staffer explained that most of those who run the Alt-Gov Twitter accounts are either current or former civil servants. They're accustomed to seeing a problem and a need and working to fix it.

"So, we rolled up our sleeves," the staffer recalled. "In 20 minutes we had an online database. In 40 minutes we had a Google map tied to the database. In an hour, we had a team of volunteers dedicated to finding SOS calls on Twitter, another team gathering the SOS calls in one place, a third team entering the data into the spreadsheet, and a fourth team entering the data into the map and figuring out the best way to display the data."

The staffer said, however, that they needed more volunteers to help code and sought out those following the #GeeksResist hashtag, who immediately jumped in to help. When the team needed more technical experts with geographic information system (GIS) mapping skills, they found more and the team quadrupled. When the team needed volunteers to take over so that the coders could take a break, get some sleep, they reached out to friends in Europe, Asia and Australia who jumped in to take over the work at night.

What began as a movement from the Alt-Gov accounts, became a massive effort of non-governmental tech experts from all over the world who wanted to help save the people of Houston.

One staffer working at the Coast Guard Headquarters, also worked closely with FEMA and other agencies in the aftermath of Katrina. The staffer explained to Raw Story via phone Tuesday that the Coast Guard doesn't suffer under the same bureaucracy as many other military outfits. As part of Homeland Security, the Coast Guard is there to save lives, not shoot at people. So, it puts them at an advantage where lower-level offices don't have to ask for direction from the national headquarters.

So, having the centralized map like the one created by the Alt-Gov accounts is extremely helpful, the Coast Guard staffer said.

The way it was done during Hurricane Katrina, Coast Guard made a grid of the city and did boat and air rescues going one by one. This method, using the map of S.O.S. calls is more effective at telling the search and rescue operations staff where to put their time and resources.

As Raw Story reported Monday, Leidys Shull was put on a waitlist, Sunday after her calls for help were forwarded and she remained on hold for hours. When she tweeted photos of the waters rising to the top of the first-story of her home, CNN called her to ask about her situation. She told CNN that she was in her home with 11 people including children and she knew that she wasn't the only person on her street or probably in her neighborhood that needed help. Shull's call helped rescue teams know that it wasn't just her, it was a street and neighborhood that needed resources be sent.

Mapping like this enables them to look where the calls for help are coming, instead of going randomly from house to house.

The Coast Guard is accustomed to these types of local rescue operations, but given budget cuts from Congress over the years and the anticipation of more cuts coming from the Trump administration, they don't have the team of people who can code something like this map.

"Trump wants to take our budget and build a wall," the Coast Guard staffer told Raw Story. "Budgets are sensitive to political whims and while the cuts haven't come yet" departments are already operating under the assumption they'll come in the next fiscal year.

"Coasties are a pragmatic sort and a small service, so we LOVE that you're doing this while we use our resources to do what we do best," the Coast Guard staffer told the Alt-Gov Twitter accounts.

"They're bringing elbow grease and technical capacity that are getting the job done," the other anonymous staffer told Raw Story of the organizers.

If you or anyone you know needs help you can contact @HarveyRelif or @HarveyRescue or you can use the #HarveySOS hashtag.