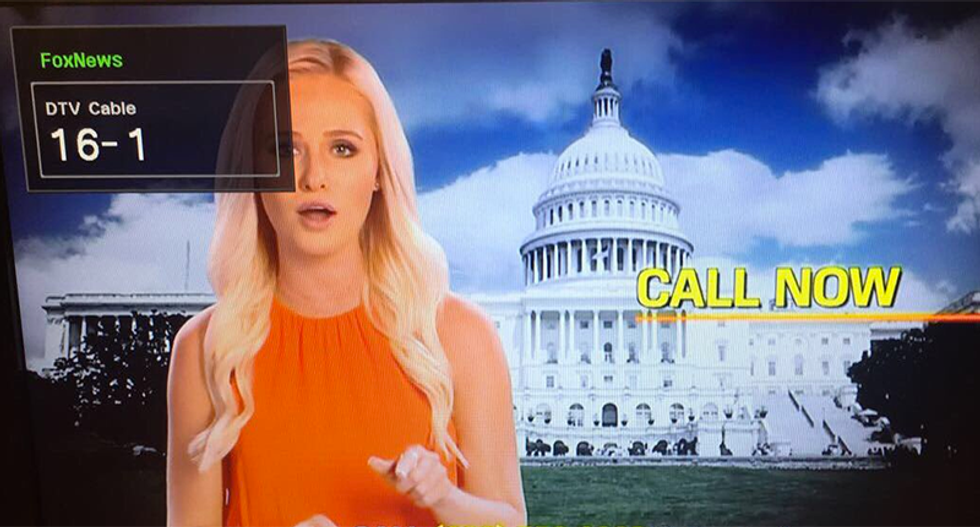 Tomi Lahren appeared in a pro-Donald Trump Super PAC on Fox News just hours after the network announced it was hiring her as a commentator, according to an ABC News reporter's screen capture.

Lahren appears on the screen asking Trump supporters to call a 1-800 number, press 1 and tell the person on the phone that the caller supports the Trump agenda. When one calls the number, a recording comes on announcing Lahren as "spokeswoman for Great America Alliance." A recording of Lahren rails against "special snowflakes" demanding impeachment and then asks for a donation for the Great America Alliance PAC. This is not her first ad for the PAC, however, it's the first ad to appear on a network that has hired her.

Fox News said the ad was purchased through a local cable provider, not the network.

The organization's website describes it as a "501(c)4 research and issue advocacy organization whose mission is to advocate for a stronger economy, a more secure nation, and a society with less government intrusion and more freedom for American citizens." It also supported Trump in the 2016 election with many TV ads attacking Hillary Clinton on Benghazi.

Lahren will reportedly be "winding down her role with the group," according to Fortune.

"Lahren will have a signature role on an FNC digital product currently in development and will also offer political commentary to the network’s opinion programming, primarily Hannity," Fox News said in a statement.

Lahren was fired from The Blaze earlier this year after attacking anti-choice activists for not being consistently "pro-life."