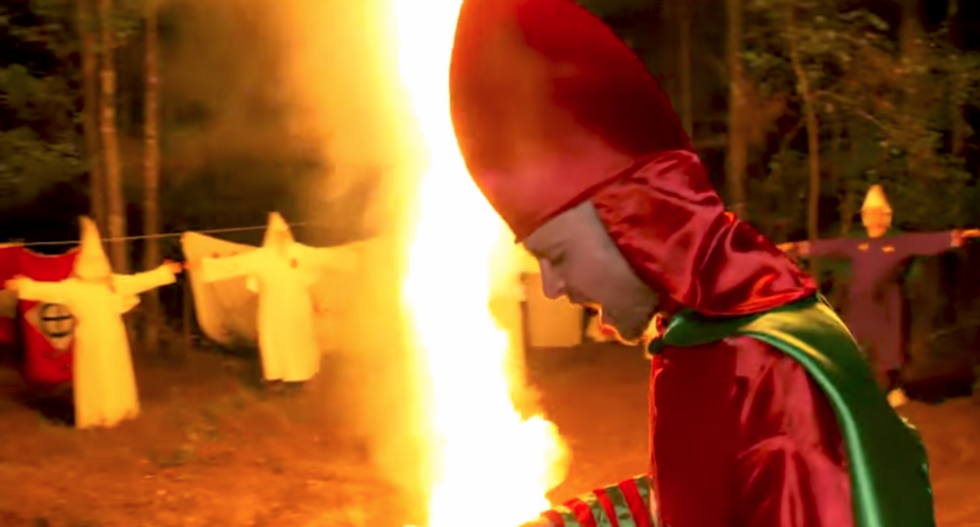 Screengrab from the 2012 ABC News documentary, 'Inside the New Ku Klux Klan'

Leave it to a klansman to disrespect a woman killed in a domestic terror attack mere days after her death.

According to the North Carolina-based news station WBTV, Justin Moore, a man who identified himself as the Grand Dragon for the Loyal White Knights of Ku Klux Klan claimed Heather Heyer deserved to die in the attack on counterprotesters at the "Unite the Right" rally.

"I'm sorta glad that them people got hit and I'm glad that girl died," Moore said in a voicemail to WBTV. "They were a bunch of Communists out there protesting against somebody's freedom of speech, so it doesn't bother me that they got hurt at all."

Moore went on to say that he thinks "we're going to see more stuff like this happening at white nationalist events."

"We were out there and I seen a lot of communist flags and anti-fascist and we're going to see more stuff like this," Moore continued. "White people are getting fed up with the double standard setup in America today by the controlled press."

WBTV noted that Moore's Klan chapter is based in Pelham, NC, and that some of its members were in Charlottesville over the weekend to join in on the white supremacist rally.

The voicemail for their chapter praises James Alex Fields, Jr., the 20-year-old Nazi who killed Heyer and wounded dozens of others when he plowed through a crowd of ounterprotesters Saturday.

"Nothing makes us more proud at the KKK than we see white patriots such as James Fields Jr, age 20, taking his car and running over nine communist anti-fascist, killing one [expletive]-lover named Heather Heyer," the recorded message said. "James Fields, hail victory. It's men like you that have made the great white race strong and will be strong again."