'My life is over': 21-year-old Charlottesville marcher whines over 'outing' by anti-fascist group 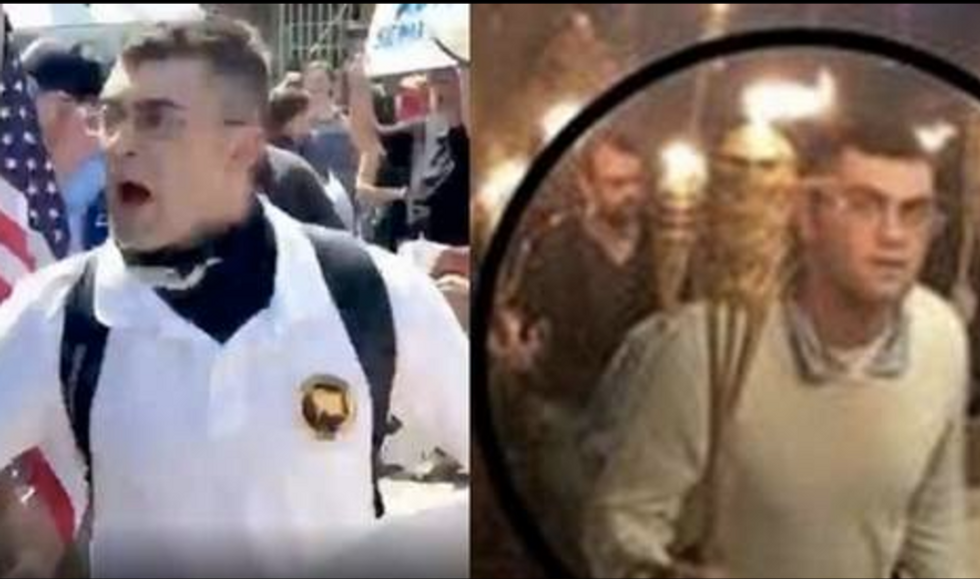 A 21-year-old Honeoye Falls, NY man was outed as a white supremacist after photos of him marching in Charlottesville, VA circulated online.

According to the Livingston County News, Jerrod Kuhn was filmed on Friday and Saturday last week by a BBC documentary crew as he carried a torch on the University of Virginia campus and chanted Nazi slogans and marched with the KKK and neo-Nazis the following day.

Rochester, NY-based group called Eastside Antifascists took still images of Kuhn and distributed 250 fliers bearing his photo throughout the Honeoye Falls area with the slogan, "No Nazis in our neighborhood."

The fliers explained that Kuhn is a participant and prolific poster at neo-Nazi website The Daily Stormer, "an avowedly neo-Nazi website around which local groups have been organizing to promote anti-Semitism, white supremacy and violence against LGBTQ communities.”

Kuhn says he's not a racist, but that he traveled the nearly 500 miles from Honeoye Falls to Charlottesville to protest the removal of a Confederate monument to Gen. Robert E. Lee from Charlottesville's Emancipation Park.

“It’s a piece of history, and I thought that it should remain,” Kuhn said. “It’s important to me that we preserve American history no matter how ugly the past is it’s associated with.”

Other white supremacist marchers from Saturday's deadly melee have made similar claims, like Washington State University College Republicans president James Allsup, who said, "They have no proof that I'm a racist" when confronted with photos of himself at the white supremacist rally.

“People have a right to know if their neighbor is a violent neo-Nazi just as much as they would if their neighbor was a violent sex offender,” said Peter Berkman of Eastside Antifascists. “I think it’s important that people know the dangers the community faces and we think people having that information is important for them to protect themselves.”

Berkman said that his group has been tracking Kuhn's participation in online neo-Nazi groups over a period of time, including the Daily Stormer, which has migrated to a Russian domain after a series of U.S. web hosting companies refused to provide it service.

Kuhn now says his life and reputation are ruined in his community and that he and his family are receiving threats.

“I can’t live in this community anymore. I’m in the process of figuring out what I’m going to do,” he complained. “I’m 21 years old and now my life is over in this area.”

“These folks don’t just get to be weekend neo-Nazis and then come home and live comfortably without having people around them knowing who they are,” said Berkman. “It’s important that people know who he is and that this person is in their community and to proceed with caution.”