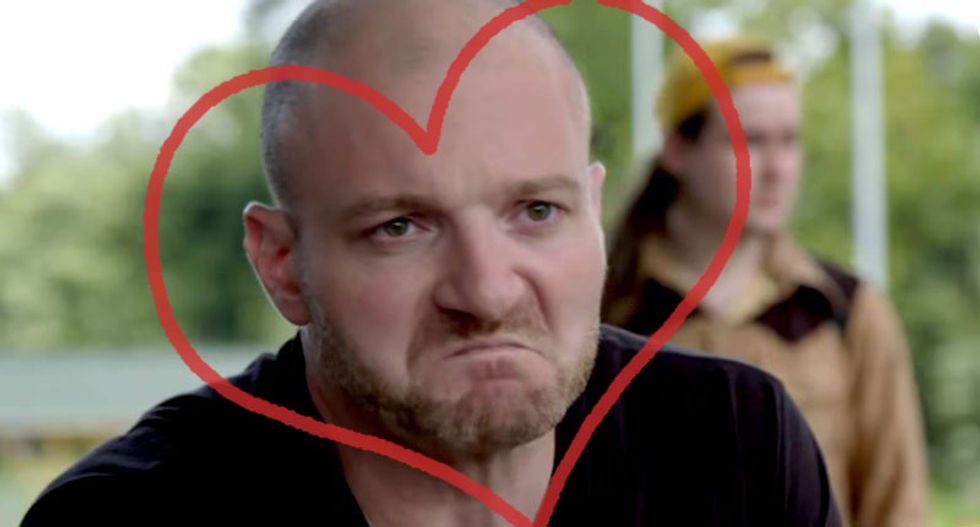 It's hard out there for a Nazi.

A 36-year old white supremacist who videotaped himself in tears at the prospect of a warrant being issued for his arrest has been banned for life from OK Cupid, the dating website said in a tweet Thursday.

“We were alerted that white supremacist Chris Cantwell was on OkCupid,” the site wrote in a post. “Within 10 minutes we banned him for life. There is no room for hate in a place where you're looking for love.”

We were alerted that white supremacist Chris Cantwell was on OkCupid. Within 10 minutes we banned him for life.
— OkCupid (@OkCupid) 1502994294.0

The site also implored users to reach out if they know of any others “involved in hate groups.”

Cantwell was featured in a Vice documentary which chronicled the violent rally last weekend in Charlottesville, Virginia that resulted in the death of 32-year old counter-protestor Heather Heyer. In his interview with Vice, Cantwell described his dating philosophy and provided insight into how he might behave as a father to a young daughter.

“Somebody like Donald Trump, who does not give his daughter to a Jew,” Cantwell said of his ideal president. "I don’t think you could feel the way I do about race, and watch that Kushner bastard walk around with that beautiful girl.”

As of Wednesday, Cantwell was able to add one more descriptor to his dating profile: wanted felon. According to a video he posted, Cantwell has been told there’s a warrant out for his arrest. Virginia officials told the Boston Globe Thursday Cantwell is wanted for illegal use of gases and injury by caustic agent or explosive.

In a post on the social network Gab Thursday, the New Hampshire neo-Nazi insisted he’s “not a coward” and has been “crucified by Jewish media and financial outlets for daring to suggest white people have a right to exist, to have a history, to have a culture, and to have a nation.”

“I’m willing to fight and die with you,” he wrote.

OK Cupid’s decision to ban Cantwell for life undoubtedly made his quest to find someone willing to fight and die with him that much more difficult. Perhaps he’ll have better luck with the “white nationalist, alt-right” dating site WASP Love.