'Put that on the air and it will cost this ministry millions': Producer reveals Pat Robertson more concerned with money than Jesus 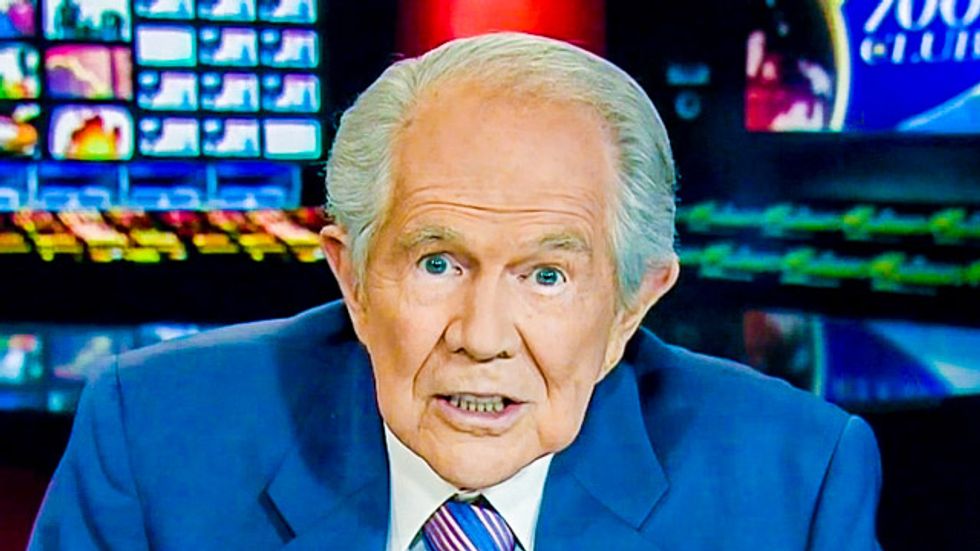 In a surprisingly candid interview with Vox, a former producer of Pat Robertson's 700 Club television show said the evangelist was more concerned with raking in cash than using the Bible to save souls.

Speaking with writer Tara Isabella Burton, former 700 Club producer Terry Heaton explained the culture that surrounded the popular televangelist's TV show as it grew to prominence in the 80's and 90's.

According to the former producer, who has just written "The Gospel of the Self: How Jesus Joined the GOP," he had a religious awakening during that period, but that his newfound Christian beliefs didn't always jibe with the vision of Robertson.

Heaton began by explaining his reason for writing the book that attacks the hand that used to feed him.

"I wrote the book because I felt I needed to apologize for my role in what we have in front of us today, although I don’t necessarily feel guilty about it," Heaton explained. "I just want to get it on the record that I participated in something that has turned out to be pretty bad."

According to Heaton, after he settled in at the 700 Club, he had a run in with Robertson that opened his eyes as to what was important to the evangelist.

"We had this idea to do a series featuring a guy who always got things wrong so that Pat could then come on afterward and tell people what to do right. So we developed a new segment: The conceit was a character who always did things 'wrong\' so Pat could come out and teach him," Heaton recalled.

"The pilot was a guy who was constantly losing money because he was trying to give his way out of debt. So he’d look at the Bible where it says 'you receive a hundredfold for what you give,' and if he was a $1,000 in debt he’d give away $100 expecting to be able to pay off the debt," he continued. "And at the end, he turns to the camera and says, 'What am I doing wrong?' And we all thought it was brilliant."

According to the ex-producer, he pitched the segment to Robertson who made a face and bluntly told him, " You put that on the air and you will cost this ministry millions."

Heaton adds that the focus of the show became increasingly obsessed with sex, and less about what was in the Bible.

"All those things worked very well with the type of Christianity we were preaching," he concluded.