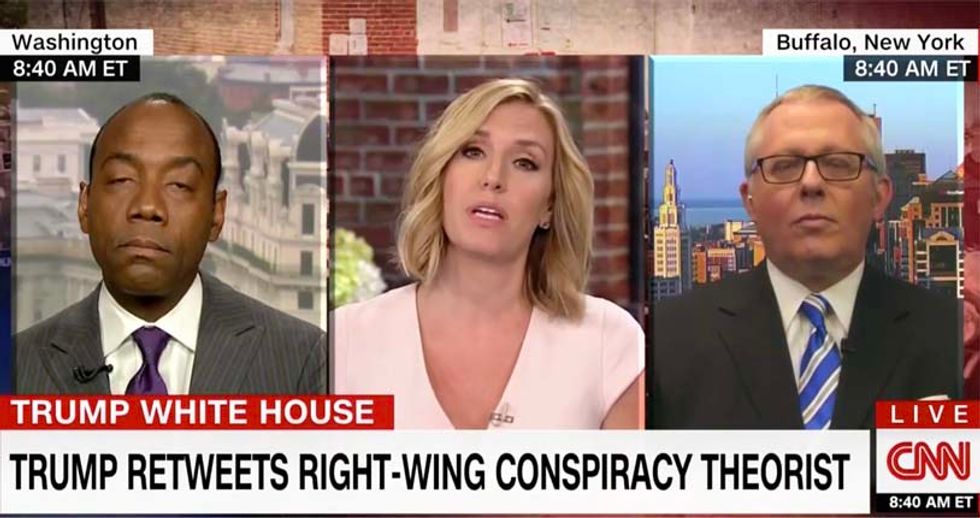 A former aide to President Donald Trump got a dressing down from CNN's Poppy Harlow after he attempted to defend the president's weak response to the violence in Charlottesville by attacking her as a reporter and the "DC establishment."

Appearing with host Harlow and CNN contributor Cornell William Brooks, former Trump campaign director Michael Caputo explained that he felt Trump made a strong statement about racism during his national address on Monday.

"Michael, you said this president has  no patience for racism or bigotry," Harlow began before calling out the president for "waiting for more than 24 hours to do it yesterday and instead of tweeting about Heather Heyer and what she stood for or Marissa and her boyfriend, heroes in all of this, and he's tweeting these conspiracy theorists and violent images and deleting them?"

"I think the president's further elaboration yesterday was appropriate," Caputo claimed. "I expected it, as I said on CNN Sunday morning."

"I also believe his first statement was a cautious one because there were people, marauders, still roaming the streets of Charlottesville when he was speaking. Carrying weapons and wearing helmets and shields, and I believe --," he continued before being interrupted by Harlow.

"Hold on," the stunned Harlow pressed. "He shouldn't have called a spade a spade, and called hate what it is and called it un-American immediately?"

"I think he did it yesterday," Caputo replied.

'Poppy, it does, of course it does and I think the president chose his words carefully under the guidance of General Kelly because there were people in the streets still ready to commit violence," the former Trump official replied before going on the attack.

"If he didn't please you and the D.C. establishment with his timing and his words, well I'm sorry about that," Caputo exclaimed. "But I think he was very clear yesterday. His statement was an elaboration, a very appropriate one, and if any white nationalist watches that statement and still believes he represents them in any way shape or form then they're just not listening"

"Just for a note, this isn't about me or the D.C. establishment," Harlow shot back. "This is about people like Heather [Heyer] and her friend Felicia who came on the show. And Marissa and Martin, and this is about Americans who are saying 'this is not right.'"

Brooks then jumped in to add, "That's precisely it. This is not about a D.C. establishment. It's about main street America. And timing is everything. Where the president issues this milquetoast statement at the onset and then the White House issues an anonymously source statement clarifying what the president did not say."