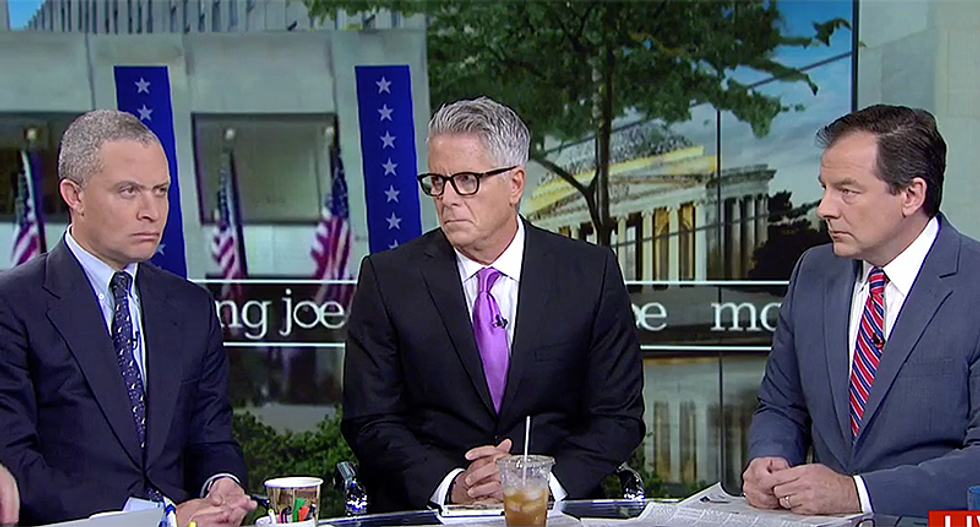 President, Donald Trump is the "yardstick by which every Republican measures himself," according to a Monday "Morning Joe" panel. So, when he refuses to pointedly disavowed Nazis and white supremacists, it doesn't reflect well on the party.

New York Times reporter Frank Bruni went on to say that Trump is the leader of the Republican Party, and as a result he has to set the standard.

"If we're trying to look for some silver lining here," Bruni continued, "something good to come out of it, he's making many Republicans who were mealy-mouth on this or came out and made their principles clear. He's making them say very sharp things they haven't said before. When we're done with Donald Trump, and I look forward to that day, these statements will live on."

He went on to say that it is strange to see the president be so soft on attacks after so many times before he's gone after people. In fact, they brought up the show hosts Joe Scarborough and Mika Brzezinski, who were off Monday, but who Trump has been merciless in going after. If Trump can go after morning political talk show hosts, the panel wondered why Trump can't disavow Nazis.

Frequent guest Richard Haas explained that there are many times in one's life where moral questions present themselves. Over the weekend, Vice President Mike Pence flew to Columbia, Venezuela to lend an American voice to calming the unrest.

"This is a country that's been ravaged by terrorism for decades,"Haas noted of the country. "What we saw the other day was terrorism. The intentional use of force against civilians for political purpose. When this woman was killed, and the car mowed down people, that's domestic terrorism in the United States. You can't separate who we are at home from what we project abroad. What happened the other day is not just domestic reality also an expression of what the United States now is."

CNBC host and frequent guest Donny Deutsch noted that there is no difference between those who don't disavow Osama bin Laden. If his allies were marching in the streets, he explained it would undermine our moral authority. He claimed that Pence's statement also wasn't strong enough and alleged that he "hedged it."

"At the end of the day, this is their boss," he continued. "True American heroes, [Gen. H.R.] McMaster, [John] Kelly and [Gen. James] Mattis. This is not about health care. This is not about politics. This is about humanity. A sense of decency. These people work for this man. If you continues to work for him you are endorsing that behavior.

After commenting that the white supremacists wrote that they appreciated the president's weak statement, the panel agreed again Trump needs to speak out.

"What a pathetic, sniveling, little nano-president he is. A coward." Deutsch continued. "You don't need a kitchen cabinet to outline how to deal with this." Deutsch said later in the show, once again describing the president as a "sniveling little" man.

Rick Tyler, the former communications director for Sen. Ted Cruz (R-TX), agreed saying that it undermines the United States on the global stage.