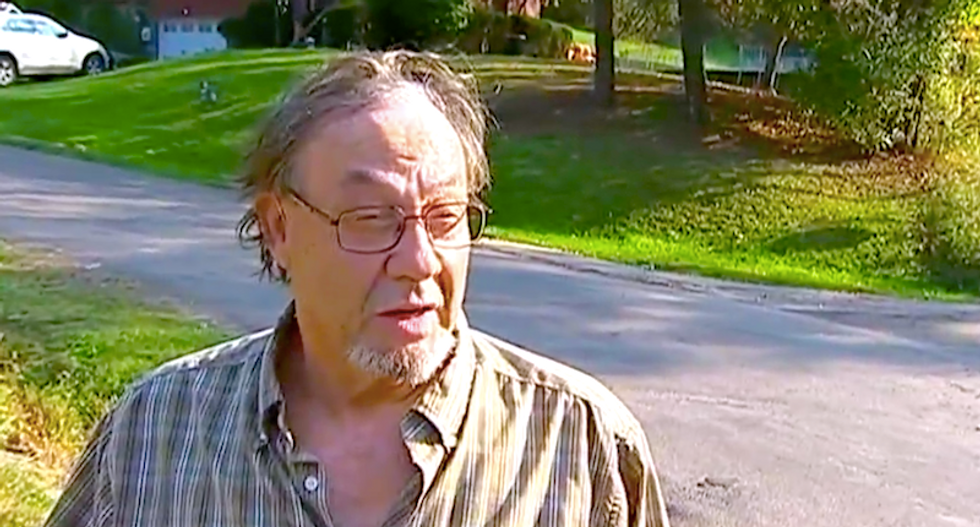 A Pennsylvania man angered his neighbors by painting a swastika on a Pittsburgh Steelers flag to show his displeasure over the team's protest during the National Anthem.

Anton Uhl, who served in the U.S. Army, said he was insulted by the team's decision to remain in the locker room as "The Star-Spangled Banner" was performed before Sunday's game, reported WPXI-TV.

“I'm upset the Rooneys didn't want to participate in the national anthem,” Uhl said, referring to the family that founded and still owns the team. “So to me, they're anti-American."

“There's a lot of kids that want to play football," Uhl said. "You don't need to pay millions of dollars for these people to stand in some type of, kneeling down, giving disrespect for everything."

He agreed players had a First Amendment right to protest, but prescribed some limits to acceptable demonstrations of political viewpoints.

"If they want to demonstrate, they have every right to do that," Uhl told the TV station. "Out of uniform in a public forum, not in a uniform representing the Rooneys. My choice, I find it was upsetting not to have patriotic participation."

Uhl's neighbors weren't happy that he displayed a Nazi symbol to demonstrate his anger.

“It's worse than anything the players did,” said neighbor Richard Bartkowski. “They just took a knee or not showed up."

The National Anthem protests have been going on since the start of last season, when former San Francisco 49rs quarterback Colin Kaepernick took a knee to protest police brutality.

But the protests exploded over the weekend, when more than 200 NFL players declined to participate in the anthem to protest President Donald Trump's personal attacks on Kaepernick and others.

“The intentions of Steelers players were to stay out of the business of making a political statement by not taking the field,” said Steelers president Art Rooney II. “Unfortunately, that was interpreted as a boycott of the anthem — which was never our players' intention.”

"If the Rooney family comes out in person and apologizes to the nation for allowing his team to do this, then, yeah, I'll take the flag down," Uhl said.