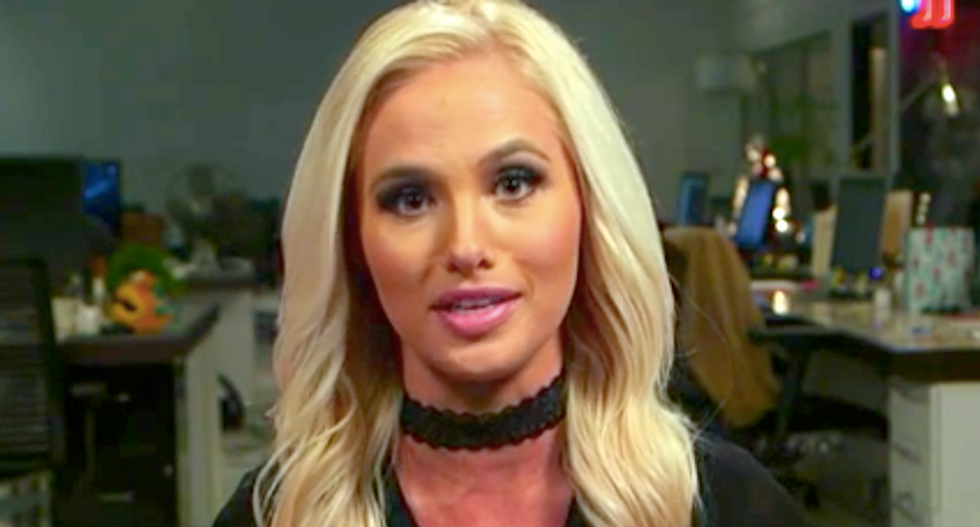 An amateur genealogist says that she has found evidence that right-wing pundit Tomi Lahren's great-grandfather was indicted by a grand jury for forging his citizenship papers.

In an essay published at Wonkette.com, Jennifer Mendelsohn said that Lahren's remarks about the Deferred Action for Childhood Arrivals (DACA) program prompted her to action.

On Wednesday Lahren tweeted, "We are indeed a nation of immigrants. We are also a nation of laws. Respect our laws and we welcome you. If not, bye. #DACA."

"I was curious how long it would take me to hit an immigrant if I dug into the tree of Tomi Lahren, the platinum blonde, snowflake-hating ultra-conservative firebrand recently hired by Fox News. The answer was 'not long,'" Mendelsohn wrote, "but I never expected to hit pay dirt quite like I did."

Tracing through Lahren's parents, then grandparents and great-grandparents, Mendelsohn found that Lahren's great-great-grandfather Constantine -- sometimes spelled "Konstantin" -- Dietrich was tried before a grand jury in Bismarck, ND for the crimes of forgery of a naturalization document and “willfully, unlawfully and knowingly” giving a false affidavit in conjunction with his naturalization proceedings.

Constantin Dietrich was born in Odessa, Russia in 1887, according to his obituary. He immigrated to the United States at the age of 18 in 1905. He went before a North Dakota grand jury in May of 1917 for violations of the Naturalization Act of 1906.

Mendelsohn wrote, "The grand jurors accused him of swearing falsely to the date of his declaration, and of altering the original papers ('with a knife or steel eraser or other instrument unknown to the Grand Jurors') to make it look like his declaration of intention to become a citizen had been executed in 1911 rather than 1909, apparently because he’d let too much time elapse before completing the naturalization process."

Ultimately, the jurors took pity on Dietrich and acquitted him of the charges. Mendelsohn said that he went on to become a citizen in 1926, ensuring that "90-odd years later, his great-great-grandaughter would be here to compare the Black Lives Matter movement to the KKK and to inadvertently admit that the right keeps hammering on Hillary’s emails to distract from the Russia investigation."

"I bring this to light not to shame or embarrass Tomi Lahren. Poke any family tree and you’ll often find similar irregularities. It doesn’t necessarily mean that Constantin Dietrich was a bad person or a scorn-worthy 'illegal' to be demonized. Perhaps it only means that like millions of others, his overweening desire to become a US citizen may have caused him to try to cut a corner or two," Mendelsohn said.

She concluded, "It means it’s pretty damn ironic that she continues to claim the moral high ground on this one, throwing stone after stone at illegal immigrants, unaware that she’s been living in a proverbial glass house all along."

Lahren was hired to host her own Fox News show after being fired from TheBlaze.com for pro-choice comments she made during a visit to ABC's "The View."

Read Mendelsohn's full essay and follow the trail of her research here.