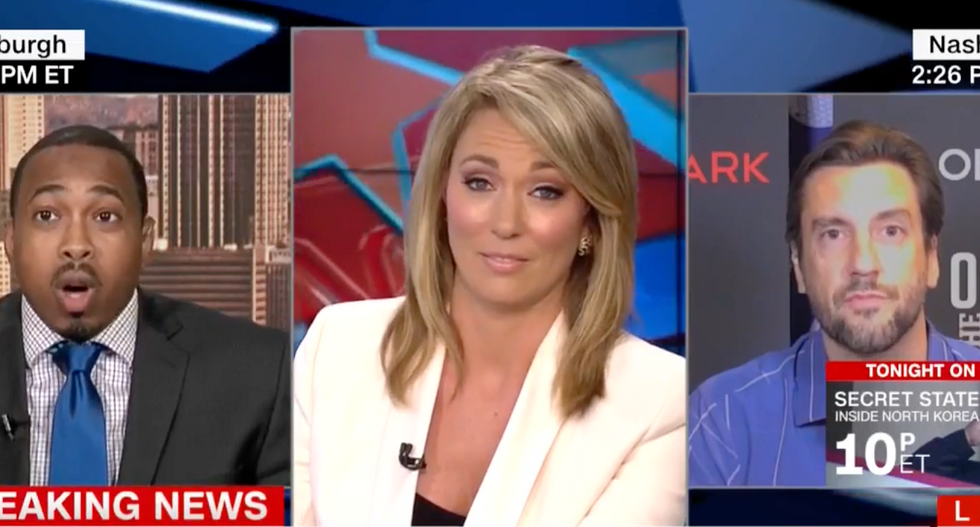 CNN segment goes off the rails

A CNN segment on Friday went totally off the rails after Fox News Sports reporter Clay Travis proudly exclaimed, on live television, that he “[believes] in two things completely: the First Amendment and boobs.”

Travis was appearing on CNN Newsroom with Brooke Baldwin to discuss the controversy surrounding ESPN’s Jemele Hill, who made headlines earlier this week after she called Donald Trump a white supremacist.

“Boobs, two things that never let me down, the First Amendment and boobs,” a proud Travis replied. “Those are the two things I believe in absolutely in the country.”

Travis went on to explain he thought ESPN was wrong to stand by Hill after firing Curt Schilling in 2015 for comparing Muslim extremists to Nazis, arguing the network is displaying a double standard in its decision to keep Hill on board.

“I'm astonished at almost everything I just heard,” former ESPN senior editor Kieth Reed replied, later adding, “for somebody to come on CNN and to say something like, ‘The only thing I believe in..’”

“Why are you sitting here live on CNN?” Baldwin asked. “Why would you say that live on national television, and with a female host, why would you even go there?”

“I say that all the time on the radio because it's true and that's what I do,” Travis said, digging his heels in. “Because I like boobs and the first amendment, which is exactly what i said.

“Listen, Brooke, I think that speaks for itself,” Reed said. “I love the first amendment as well. I also love women.”

After some crosstalk, the CNN host put her foot down.

Hours after his "boob" tirade, Travis claimed on Twitter that CNN invited him back on air.

CNN confirmed to Raw Story that Mr. Clay was, in fact, not invited back on air, as he claimed.